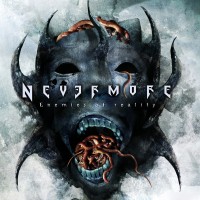 
Over the course of nine years [even more if you count the years with Sanctuary], Nevermore have been slowly rising within the ranks of American melodic heavy metal. After their critically acclaimed Dead Heart, In A Dead World of 2000, Nevermore have been on the road playing to an ever-increasing fan base.

So after a three-year wait, anticipation for a new Nevermore album is fairly high. Whether it's the fact that it's their last album they are contractually obliged to deliver to Century Media Records, an absence of new music from them in three years, or a combination of both, Enemies Of Reality is one angry and heavy album!

Van Williams? driving pounding of drums combined with Jeff Loomis? thrash sounding guitar certainly makes for a powerful opening to the title track ?Enemies Of Reality?. Vocalist Warrel Dane is in fine form, and throughout the verses seems to put in a frayed and frantic effort of pure desperation. ?Ambivalent? carries on with the manic energy of before, but its Loomis? solo that becomes the featured focal point within the aggression.

?Never Purify? flows effortlessly soon after, and is perhaps one of the albums stand out tracks with the guitar heavy progressive middle section and Loomis? shed/riff drive. Not unlike ?Believe In Nothing? from Dead Heart, In A Dead World, ?Who Decides? is the album's more melodic and slower number. While not exactly the same, ?Tomorrow Turned Into Yesterday? is another slower, yet heavier number. Comparing the two would be fruitless as ?Tomorrow Turned Into Yesterday? does show a completely different [dare I say mature?] side to the familiar Nevermore style, and has the clear potential of being the single from the album.

There's plenty of smouldering heaviness to ?I, Voyager?, while Warrel spits venom throughout the vengeful ?Create The Infinite?. ?Noumenon? is both haunting and harrowing in true Nevermore style, with the former almost being instrumental with a simple chant of, ?There's no stronger drug than reality?. The final number, ?Seed Awakening?, is almost the opposing sequel to ?Noumenon? with it's melodic/thrash breakdowns and heaviness.

Overall, Nevermore's fifth effort is remarkably intense and the perfect follow up to Dead Heart, In A Dead World. The production work of Kelly Gray [Queensryche/Dokken] is nothing short of complimentary, and brings out the clarity and precision of the bands complex compositions. The only minor point is the running time of just over forty minutes. Again, as it's their last album for Century Media Records, and features nine solid tracks, it's a minor point at that.

Enemies Of Reality is the sound of an angry, heavy and uncompromising Nevermore. Personally, I wouldn's have it any other way!
Written by Justin | 18.09.2003