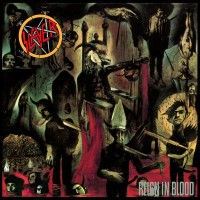 
The greatest metal record of all time. This topic is often debated upon in the Metal Kingdom and to most there is no definite answer. A worthy contender for this title is Slayer's 1986 masterpiece, Reign In Blood. Few albums withstand the test of time as well and even fewer have had such a huge impact on the metal world as this one.

The opening track is the legendary 'Angel of Death' and starts things off with a scream. Tom Araya's voice is at it venomous peak having shed the "I have no testicles" sound of their earlier releases. He shouts gruesome lyrics, song after song with such serial killer conviction it sends chills down your spine upon first listening. The speed in which the vocals are delivered makes for a fun along with the lyric book, that is of course until you learn all the songs word for word.

Kerry King and Jeff Hanneman have crafted some of the most brutal guitar riffs in history. These riffs reach super-sonic speeds while never compromising their heaviness. King and Hanneman may not be the most technically dazzling players in the world, but their solos in Reign In Blood are nothing short of awesome. In 'Necrophobic', 'Jesus Saves', and 'Raining Blood' you would swear you were hearing animals being slaughtered in front of you and can practically feel King's fingers stabbing your skull each time he hits the fret board, not typical metal solos by any means.

The key element to Slayer has always been Dave Lombardo's stellar drum work. His amazing drum fills had already been demonstrated in the past ['Chemical Warfare'] but Reign In Blood shows that Lombardo is the double bass pedal master! Look no further than his spectacular drum solo at the end of 'Angel of Death' as proof. His uncanny ability to garner such pummeling momentum, and then slow down and create such a groove on the cymbals [the breakdown of 'Altar of Sacrifice' and intro of 'Criminally Insane'] is remarkable. Not to mention he is FAST AS HELL......I pity his snare.

With a running time of 28 minutes, listening to Reign In Blood is like a quick kick in the nuts and is guaranteed to knock the wind out of you. While it may not be the greatest metal record of all time, it is without a doubt the greatest Thrash record. Reign In Blood's content and brutality shocked the world in 1986 and is the basis for what would become Death Metal. ALL bands in extreme music today owe something to Slayer and this album.
Written by Edible Autopsy | 24.09.2003