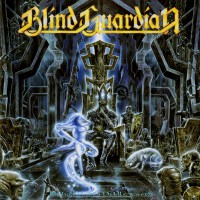 
Blind Guardian is an absolute star of Power Metal and their 1998 release 'Nightfall In Middle-Earth' is a monolithic work. Using the expression "left a mark" isn't enough. Of course this album has left a mark upon all who have listened to it and left a mark in the history of Power Metal and metal in general. And also literature, all in all, being like an asteroid leaving a crater.

Being such an exceptional album, Nightfall In Middle-Earth has been subject to both positive and negative criticism. Fellow reviewers Aguirre and Gurr wrote two reviews for the release which were like day and night but still concentrating on the main subject; fantasy meeting metal music. Questions rising before us again, how and why re-enact fantasy literature in music and how to do it so that the outcome would be as enjoyable as possible?

Having read the reviews of Aguirre and Gurr, I was lead into digging more deeply into this particular album and weigh its positive and negative sides. So here I am trying to give the most objective and neutral analysis as possible.

Why is the album so special? After playing the tracks from the beginning to the end repeatedly and some particular songs even more frequently, I'd say that the album is solid. Well done, nothing to cry about. It is good but it doesn't excel amongst other works of Blind Guardian. It can be called "another successful album" but personally I don't see anything very shining about the music. Everything's well done, good Power Metal indeed. However, I've heard the style occurring in other songs and albums as well.

Now if we come to the attempt to create a 'soundtrack' for Tolkien's 'Silmarillion', we meet a whole other story. A brave step taken by the band. This epic tale of fantasy literature is not at all an easy thing to forge into music. The dialogues featuring the main villain Morgoth are on right place. Nevertheless, they don't add much to the album itself. Just songs would do it perfectly. I liked the voice of Morgoth though. He sounded like an intelligent and tragic villain here instead of stressing the 'evilness' of the character. The inevitable clichés of the epic power and fantasy genre never started to bother me here.

My personal favourites from the album are "Time Stands Still" and "Nightfall". I'd also point out the intermezzo called 'Lammoth', the haunting cry of Melkor is atmospheric and awesome. A horrid scream, echo and nature, nothing more needed.

In fact one could write pages for this album, so this tiny review isn't able to describe all the nuances of the album which it has an abundance. I agree with all those who call it a must-have work. For those who haven't heard it, get it fast. It's not just for Tolkien fans or fantasy readers or Power Metal fans. It's for everyone. Just for being an asteroid-like album which hit the music world.