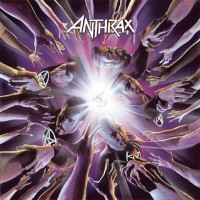 
One of the few surviving bands of the late eighties thrash movement is Anthrax. After Joey Belladonna was dismissed following the 1991 dual tour with Public Enemy [in support of the ?Bring The Noise? single lifted from the Attack Of The Killer B's compilation album], many wrote the band off. However, the recruitment of ex-Armoured Saint vocalist John Bush raised the level of credibility for the band regardless of the metal worlds fascination of distortion and a new genre called grunge. 1993's Sound Of White Noise, 1995's Stomp 442 and 1998's Volume 8 ? The Threat Is Real were all solid releases, but failed to live up to expectations due to lack of promotion and a grand shift in musical climates. In the meantime, Anthrax has stuck to their guns [unlike some other bands from the same era], and it looks like years of perseverance might just pay off.

The slow building riff progression of ?Contact? makes way for the unleashed fury of classic old school Anthrax of old in ?What Doesn's Die?. Drummer Charlie Benante's playing is exceptionally prominent, while John Bush's vocals have rarely sounded better. ?Superhero? and ?Refuse To Be Denied? maintains the albums early promise with more killer choruses, thick sounding guitar riffs and powerhouse drumming, while ?Safe Home? has hit single written all over it! The unbridled newfound energy continues with ?Nobody Knows Anything?, ?W.H.C.F.Y.A.? and ?Think About An End?, but it's the mind blowing complex drum rhythms in ?Nobody Knows Anything? that marks the albums high point. There's more than a touch of Scott Ian's black metal love in ?Black Dahlia?, making for an interesting new colour to Anthrax's palette, while old friend Dimebag Darrell adds his distinctive guitar lead to ?Strap It On?. The added bonus tracks ?Safe House [acoustic]? and the cover of the Ramones ?We're A Happy Family? tie up the sixteen-track album of time honoured rock anthems that only come with years of experience.

Anthrax is back to claim back their place as metal's old guard [for those of you that thought they went away in the first place], and at the same time, and in the process, show the younger generation just how it's done.
Written by Justin | 01.09.2003