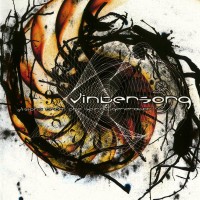 
First, this album is supposed to be 'extended black metal' but it's all but black metal! Closer to progressive cosmic doom/death metal in fact [yes that's an existing metal style!]. Anyway, Visions From the Spiral Generator is a fuckin' great release! I like this album so much that my first feeling was to hear an Opeth's side project [I love Opeth...]. You want to hear incredible stuff? Vintersorg - also the name of the singer/guitar player - makes all vocals from death grunts to angelic voices. Great performance dude! I know he's also Borknagar's lead singer but I've never heard that band before, so it would be difficult for me to compare Vintersorg with Borknagar. Talking about Borknagar, the drummer on Visions From the Spiral Generator is Borknagar's drummer too [Asgeir Mickelson]. And talking about line-up, it has to be said that Steve Di Giorgio - former bass god of Death and Testament - plays on that album too. Thence tremendous bass parts [listening to the song 'E.S.P. Mirage', that's obvious!]

Now how to describe the music? Melodic death metal with strange prog inspirations? Maybe you would have to listen to some samples to make your own opinion. See, each song is so particular that you surely love one of them, even if you are only interested in power metal. Some lyrics are in Swedish and honestly that rules! My favorites are 'A Metaphysical Drama', 'Universums Dunkla Alfabet', the experimental 'E.S.P. Mirage' and the wonderful ballad 'A Star-guarded Coronation'. Now, the major drawback of Visions From the Spiral Generator is its shortness... Nevertheless it's better to have 35 minutes of Vintersorg than one hour of any other pure death metal band [that's my opinion!] And, if you were a true fan of Deicide, you would say that 35 minutes is the perfect length... [all their albums are short]

To resume, very nice work especially with vocals. Unfortunately, the record is too short to deserve a better rating. However, it has to be said that Visions From the Spiral Generator is an unusual album with all its influences. The kind of album metal needs to progress.

Written on 25.08.2003 by
Dream Taster
Bringing you reviews of quality music and interesting questions such as: