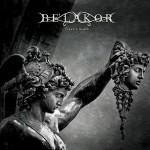 
After hearing and reviewing the first offering of Melodic Death Metal from Australia's Be'lakor I found it to be a rather promising debut. The promise wasn't misplaced either as the band have backed themselves up rather nicely with this new album entitled Stone's Reach. While their previous release The Frail Tide was good, the new album is cleaner production-wise and I think a deeper piece of work as well.

Stone's Reach actually begins surprisingly softly. Ambience with soft cymbal taps and soothing guitar notes lull the listener into going along with something soft and simple. Not before too long however heavy guitars and harsh growls take over. The introduction to this first song however is perhaps an indication that while this is Melodic Death Metal, it's somehow a work of dark beauty. Stone's Reach is filled with examples of clever changes of pace, mournful solo-esque guitar work and extraordinary melodies; all of this coming from an album which is of a type of Death Metal.

It's one thing to write a good piece of music though, it can all fall apart if it isn't executed properly. Well Be'lakor has shone through in that department as well. The drumming is as technical as it needs to be and the guitar work contains the right amount of heaviness for each scenario in each song while being all the time well performed. The keyboards/ambience and piano of Steven Merry is applied better this time around. It adds that extra layer to the songs when it entwines with them. The harsh guttural growled vocals could fit in with Brutal Death Metal music but yet they don't seem out of place here either. The song (or rather opus) "Countless Skies" exemplifies all the good parts of Stone's Reach. It starts slowly with a brilliant and deep guitar riff (which later features as a kind of solo) and just builds up with ambience and technical piano work. Launching with double bass drumming and fast guitar work doesn't detract from the splendour this song seems to contain. This song would have to be my favourite on Stone's Reach which is handy as it concludes the album leaving good thoughts of the album.

Stone's Reach isn't as much a good piece of Melodic Death Metal as it is a piece of art. Despite the music feeling very much this way, the cover art, back cover and booklet imagery is all a good representation of this work. Be'lakor have created a piece of dark and delightfully melodic Death Metal that you won't want to pass up the chance to hear.