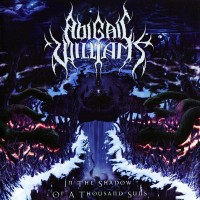 
Symphonic black metal is quite a saturated genre. In fact, since the inception of bands like Emperor, Dimmu Borgir and Cradle Of Filth this combination of pure aggression with melody and symphonic arrangements has been visited so many times that a lot of metal fans have become tired of this formula. So, when Abigail Williams decided to abandon the metalcore of their first EP to record a symphonic black metal album with the collaboration of Trym (of Emperor fame), one could raise doubts on the pertinence of the final result. My answer is that Abigail Williams succeeded in writing one of the best albums of the genre since Emperor's In the Nightside Eclipse and I hope this review will convince you to give it a listen.

The album starts with a keyboard intro which gives a hint of what's to come by showing a bit of the amazing talent of keyboardist Ashley Ellyllon. Then things get really interesting: ultra fast riffs, blood curling shrieks and poetic lyrics by Sorceron, top notch execution, amazing drumming including the usual lightning-fast blast beats and a deep sense of melody; every element of the music merges together to make your head bang at a dangerous rhythm.

The album flows well from song to song while the same elements are used but always with little differences that prevent the music from becoming predictable or formulaic. Also, the band has been very keen in introducing some unusual elements coming from their metalcore background. This can be heard by the quite extensive use of amazing breakdowns and tempo changes in their songs and also by the use of clean vocals notably in the last song of the album, which is also one of the best tracks on this album: "The Departure". Other notable tracks include "Into The Ashes", "Empyrean: Into The Cold Wastes" and "Floods".

The production on this album is awesome. Not only is every instrument clearly audible but James Murphy (Ex-Death member) and Sorceron have done a wonderful work by giving the album a sound that is clean without becoming clinical. Everything sounds big and great but stays very organic and edgy. The amazing guitar work of Bjornthor, Mike Wilson and James Murphy (who contributed some solos on three songs) is heavily distorted but without killing the numerous subtleties in it. The drums of Trym and Samus sound like hell giving the listener a full appreciation of their great talent. The keyboards of Ellyllon are very present while not taking all the space and leave an haunting feel in the listener's brain.

To conclude this review, I'd like to say this album was one of the best discovers I made in 2008. The individual performances, the quality of the compositions, the original elements brought in the genre by the band and the amazing production work all contribute in making me believe this album should be given a try by symphonic black metal fans and even by extreme metal fans in general.