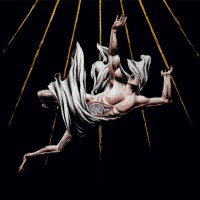 
01. Obombration
02. The Shrine Of Mad Laughter
03. Bread Of Bitterness
04. The Repellent Scars Of Abandon And Election
05. A Chore For The Lost
06. Obombration


For 40 years Metal has wrecked havoc upon this planet and over those 40 years we've seen brilliant bands, terrible bands, and bands so bland they might as well have not played anything at all. With literally tens of thousands of bands in existence the most difficult feat of a modern group is to be completely and utterly original.

And without a doubt, Deathspell Omega have achieved this with the album Fas - Ite, Maledicti, in Ignem Aeternum.

As the suffocating opening track "Obombration" begins one immediately understands that this is a very dark and brooding album. The following four tracks make up the main meat of the album and are insanely twisted and mindbogglingly fast. Nearly inhuman drums blast alongside a barrage of tremolo riffs. The term 'riff' is used very loosely however. This is not an album filled with hooks and memorable passages. This is an album designed to torment the listener, to lead them into a pit of eternal fire. Bands such as 1349,who have reputations for playing Black Metal at neck breaking speeds, pale in comparison to Deathspell Omega on this album. I have never heard anyone play their instruments like this and I doubt I ever will again, except from on another Deathspell Omega album. Just when you think you've had enough discordant passages to last you a lifetime the guitars may suddenly stop and leave you with an ambient passage. After a short respite from the aural barrage you're once again shot into the maelstrom. This album is near psychological warfare.

Vocalist Mikko Aspa croaks his way through lyrics which are some of the most unique within the Black Metal scene. Though decidedly anti-Christian in nature they are sophisticated and just as insane as the music they accompany. For example, from "The Repellent Scars of Abandon and Election" :

"The eye can outstare neither the sun, nor death... if I sought God it was in delirium and in the delight of temptation."

One has to listen to this album to hope to understand it completely. From what I have observed this album is a Love or Hate affair and this is not without good reason. It is so odd, so malformed, that one cannot help but to either shun it completely or embrace every bit of the wicked insanity. Either way, I can guarantee that you will never hear an album quite like this ever again. If you choose to listen to this, just do me a favour: Try to imagine someone coming up with this album in their mind. What an insane individual he must be...