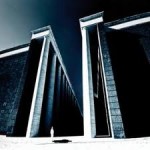 
"There can be no return from this, I envy the dead."

The italian doom metal act Void Of Silence hail once again with a new effort, The Grave Of Civilization. A few years have passed since the monumental Human Antithesis saw the light of day and their fourth full-length was more than welcome after all this time, being the sound sequel of its predecessor one could say. Alan Nemtheanga is no longer behind the microphone and this role was given to Brooke Johnson and to tell the truth, he succeeds both in terms of interpretation and feeling.

The overall music is a soundtrack to ruin, tending to evoke an industrial pro-apocalyptic scenery filled with despair, fear, woe and an omnipresent menacing essence. The white figure with the dark shade under sun's stare in front of a colossal monument on the cover artwork says it all, along with the title and the aforementioned atmosphere. Apart from the ominous aesthetic that floats here and there distorting your mind in the most appropriate way, you'll always find a glimpse of devoutness inside these dreary musical halls, euphoria before utter end? Probably, but still, you keep on listening, lurking deeper and deeper and the more you proceed the darker it gets; the clearer the sight in front of your weary yet still naked eyes.

The guitar work is as it should, weeping riffs and desolate chords begin the structure whereas the utterly bombastic or just accompanying rhythm section hold it tight, until it shatters to pieces along with your thoughts at the very end of the album. The everflowing keyboard melodies caress you in such a manner as if time could stand still for a moment in eternity and see humanity's course from beginning to end, the so called civilization of vulgar experimentation of one upon another, presenting various soundscapes, bitter, desperate, devout, ominous, even oriental and with this enriching and strengthening the overall scenery. Brooke Johnson's heart-rending interpretation resembles to Nemtheanga's on Human Antithesis, but still, you don't give a piece of spit, you lose yourself in undorned by hope and light pits of knowledge with Brooke being the prophet of elegant disharmony.

"My voice has become a distant echo in an empty world,
conversant with the ghost of dead memories.
Truth be told, I like the solitude, now that I am alone."

At least then, you can harm nobody. Except for yourself.

Written on 18.09.2010 by
KwonVerge
"It is myself I have never met, whose face is pasted on the underside of my mind."
More reviews by KwonVerge ››