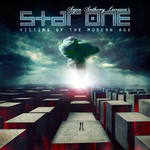 
It has been a while since the last time a Lucassen tune was stuck in my head properly. It really has been a long time. No, it was not Guilt Machine album, and not the last Ayreon album, and not even the first Stream Of Passion, although that one had some really good moments. Last time it really clicked for me was Ayreon's The Human Equation. This time it seems to be different, whether for good or bad time will tell but the first two weeks have been filled with all positive emotions.

If separation into different projects for all the stuff Arjen Lucassen releases is needed or not is up for argument but in this particular case it is justified. Those who know the first Star One album Space Metal will definitely recognise the atmosphere, the riffs, the tunes, Ed Warby's drumming, and of course the vocal cast. All main singers present on the first album are back again. Dan Swanö, Russel Allen, Damian Wilson, and Floor Jansen bring some sense of consistency to the project as well as their excellent voices.

As I already said, musically this album is recognisable as Star One. Making heavy use of keyboards it follows the established line of this so-called space metal, a mix of prog metal and bits and layers of space rock. It is quite a bit heavier than any Ayreon album and considerably faster and more straightforward. I don't think I say that often but I definitely welcome a more linear approach for a change. Makes it more tight, it does, and allows to enjoy cool riffs and tunes for more than a brief passage, something that lately rarely happens with Ayreon where a glimpse is sometimes all you get.

Ever since Ayreon got wider and wider in musical sense, ending up all over the place, so to say, everything Arjen Lucassen releases makes it sound more or less as Ayreon derivation (Lucassen derivation would probably be a more proper term here). If something is separated as a project it should feel different. That was one of the issues I had with Guilt Machine - it felt too Ayreon. Some of the Lucassen trademarks have been worn thin over time. Of course, Lucassen trademarks are all over this album as well. It's inevitable, that's why we call them trademarks. However...

Star One has managed to step apart in this sense. True, some songs, like a limited edition's "Closer To The Stars" with Tony Martin from Black Sabbath, and the huge "It All Ends Here," have distinct Ayreon feeling of grandeur to them. Latter one also sporting harmonies not unlike endings of the two last Ayreon albums, as does "It's Alive, She's Alive, We're Alive." But more importantly it's the songs that have Star One written all over them - "Digital Rain," "Earth That Was," "Human See, Human Do," "Cassandra Complex." These all rock big time, especially the awesome opening guitar tune of and keyboard passage after the chorus part of "Human See, Human Do." And some trademarks still work well, the "The Dream Sequencer" class guitar solo in the middle of "It All Ends Here" feels like a meeting with an old friend.

It would take too many words to describe why I like all the main singers, every one of them. They are all brilliant and so different from each other. Which is probably why this cast works so damn well - they are complementing each other, everyone having own range to cover. Dan's low voice, Russel's power range, Damian's high clear vocals, and Floor to add feminine touch. However, I purposefully omitted limited edition's "As The Crow Dies" from the above list of awesome songs. This one is a gem, Mike Andersson's vocal performance just fits so well supporting keyboard tunes. If he's anything as excellent in Cloudscape as in the chorus parts of this song, he surely is a find for me.

As a whole this album really lives up to the expectations. That is if you're expecting stuff along the lines of Space Metal and Ayreon's Flight Of The Migrator. Well, maybe I was expecting a notch more given the samples and teasers before the release. But narrower focus and the first album as a guiding beacon has worked well this time. It must also be mentioned that lyrically this album stays true to the original concept. It's all about science fiction movies, Earth-based post-apocalyptic ones this time. That'll definitely add to the fun if you're into them. So, pardon me for omitting opinion on some of the guests on the album, this is already long as it is. In the end all I have to say is that I for one like this album, been a while since I was this happy with the end result.