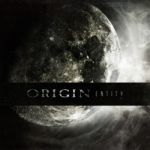 
American death tyrants Origin are here with their eagerly anticipated follow-up to 2008's beast of an album Antithesis. New vocalist Jason Keyser has joined the ranks, but stylistically the band have not deviated from their previous musical path. Entity is another unrelenting blunt-force trauma to the ears from start to finish, with all the technical and pulverising traits we have learnt to associate with the band.

Let's not kid ourselves though, Origin are a one-trick pony, and always have been. Their constant battery of almost unprecedented drum tempos are one of the sole attractions to this band. In a genre where pure speed and brutality is revered, Origin are the kings of the castle. The band are vastly talented musicians, but aside from the unparalleled drumming provide little beyond generic. The man-machine John Longstreth behind the drum kit blasts his drumming performance of a lifetime on Entity which is only accentuated by the crystal clear production, but becomes part of a wall of sound that is initially enjoyable, but within a few spins of the disc becomes just a little samey.

Vocals were never a large focal point of the band, and aside from a few higher-pitched screams, you wouldn't really notice or care that the band have a new guy growling at you. Origin with their technicality and blastbeat speeds are still a unique force in the death metal world, but Entity neither takes a significant step either forwards or backwards. Indeed it is safe to say that previous fans of the band will not be let down by this album, and likewise will not persuade any previous disparagers of the band.

This is a great album, but Origin are still yet to be able to produce an album where the rest of the musician's performances are as memorable as the drumming. At the end of the day however, it all comes down to which elements in death metal a person is turned on by. A speed-freak or someone seeking mindless brutality will lap this album up, but someone searching for more depth will inevitably not be gripped. Entity may be a little less interesting on the whole than Antithesis, but is a more refined and faster effort still. It is a good job that this pony is so enjoyable to ride! Heehaw.