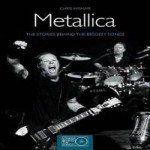 
"Great, another book on Metallica. Just what everyone needs in the world!"

Believe me when I say that. While doing my search for interesting metal books, it was about time I decided to pick one up about Metallica. Unfortunately, the majority of it was all autobiography books. UNTIL (yes, until) I stumbled upon this book. Now, being a former Metallica fan, I've decided to pick up the book that talks about what the songs are about! This is great because I've been trying to figure out what "Trapped Under Ice" and "Fight Fire With Fire" was about...

Now, about the book. Again, like "Black Tooth Grin," this book is almost close to being a compliment fest targeted towards the band, more so James Hetfield, the dude who writes the majority of the lyrics. To add to it, I felt a bit of negative reception towards Anthrax and a little bit towards Megadeth, while the author regards Slayer as... well, Slayer. How else can you describe Slayer?

Yeah, it can be quite informative, depending on how well you know your bands/music, but if you are a pro, you won't need this book. But to be fair, some of the captions in the book that describe the pictures were pretty funny, or silly, but I like funny and/or silly, so I'll let it get away with that.

Like most books that aren't an autobiography/biography, they STILL go on with telling a bit of the history of Metallica. How they started, Dave Mustaine being bad ass but stupid, Cliff Burton's death, the fame and the rough times and the more fame to follow, that stuff. In retrospect, the author half-assed it with the history of the band during the following of the ReLoad (not Load, that was done pretty well) saga.

Now to the main part of the book: the truth behind the book. I mostly read it like a story book, but when you really think about it, this is a reference book. It really was interesting to find out about what the "Diamonds in the Rough" kind of songs were about, because it's different for other people. For instance, I didn't know what "Escape" (from Ride The Lighting) or "Invisible Kid" (from that album that must never be mentioned) was about, while for another person it could be Don't Tread on Me or 2x4.

So with the review out of the way, I'll say this. Get the book to read as a reference book. If not, read it like a story book, because it becomes more entertaining that way. Also, I wouldn't object to using this book as a way to brag to Megadeth fanboys about how Hetfield doesn't suck majorly when it comes to writing music.
Written by Project Endgame | 25.05.2011