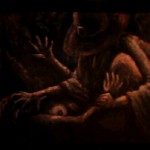 
As far as I recall in a past review I had expressed my very positive opinion concerning Australia. Whenever a band appears from there and it's good, it's not just good, it's just plain awesome. And the odd thing is that this country has given birth to some enormous doom metal acts, diSEMBOWELMENT, Mournful Congregation and Abyssmal Sorrow to name a few.

MurkRat is another band hailing from that specific place of the south hemisphere. I've seen them being labeled as gothic/doom metal and to tell you the truth the only gothic part of their sound could be some references in the female vocals that bring forth memories of 80s gothic rock/post punk/dark wave female interpreters at their darkest and most sinister peak of expression. Henceforth one could refer to MurkRat as atmospheric doom metal in general. Drudging The Mire is their second full-length to date and it's here to, apparently, devour you. Even the sickening cover is quite representative.

The first thing that leaves a big impact on the listener is the ambiance the band evokes, everything in here is soul-crushing, devastating and leaves an impression as if you've been wandering among the ruins for years. Solitude reigns supreme and these ruins are no other but your desecrated memories lying in nostalgic blossoms bound to never bloom. The guitars unleash an ominous aura through their heavily distorted riffing and eventually reach a funeral doom pace with the rhythm section following the same tempo coordinates. Where the real magic dwells though has to be the lair of the vocal interpretation and the keyboards/piano factor. It's been a long time since I last listened to such simplistic piano/keyboard passages creating a thick and surrounding mist and for the first time in a metal band I witnessed how fabulous can be the combination of low piano keys with the bass lines and the drumming synchronizing so wonderfully together giving a different maneuvering meaning to the term "bombastic". Mandy is simply wonderful, not only she performs the guitars, the bass and the keyboard/piano (she left the drumming to Neil), she also owns a charismatic voice. A heart-felt interpretation of a broken widow regressing to the shadows, you will witness woe, desperation, some vicious form of devout self-pity and of course anger and lunacy through a wide variety of expressions and vocal tones.

In this musical envelope named Drudging The Mire you will find enclosed 72 minutes of dissonant beauty, 8 atmospheric doom metal compositions of which the 3 hold an ambient approach, especially "World" is pure mystagogue with all those chanting vocals. "The Mighty Spires", "Electric Womb", "Speak" and "Faceless" will demolish you so gently you'll be grateful being disemboweled with such atrocious kindness. The album is Drudging The Mire of your soul, you've been warned.

Written on 16.06.2011 by
KwonVerge
"It is myself I have never met, whose face is pasted on the underside of my mind."
More reviews by KwonVerge ››