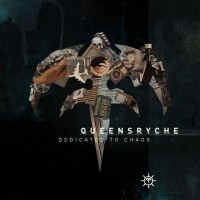 
2011 is truly a fine year, that I will not deny. But then again, we've had quite a number of releases that reach such abysmal depths of quality that they somehow even manage to outshine and draw more attention to themselves than the stellar records much more deserving of attention. While Dedicated To Chaos doesn't exactly hit the absolute and complete rock-bottom like some 2011 albums we've been blessed with, calling it total shit mostly hits the mark.

I'm no fan of Queensryche, but I've always managed to find pleasurable songs on almost every album of theirs. Dedicated To Chaos, on the other hand, is not only not a pleasure to listen to, but getting through about 70 (yes, seven-fucking-ty) minutes is a serious challenge even for the most patient of listeners. So what's it sound like? Confused would be the word most appropriate to describe it. The opener "Get Started" is basically a classic rock tune, and a rather neuter, bland and uninspired one at that. What follows after is a rather heterogeneous mix of classic rock, a splash of prog and I'll be damned if there isn't some funk in there as well. The problems start as soon as the various contrasting elements start intertwining: there is no logical reason why an album like this shouldn't work theoretically, but Queensryche have completely failed to properly execute what might have been quite a fine idea.

For an album that aims to be catchy, Dedicated To Chaos commits the worst possible crimes: being bland, unmemorable and totally lacking hooks that really sink in and stay in your melon for days, if not longer. Furthermore, the gigantic length does a great disservice to it. It took me a lot of time to properly distinguish one track from another, as too many of them sound way too much alike, which is especially evident once the incredibly samey "drown the uninspired instrumentation in vocals by singing louder" choruses kick in. Lyrics are something I pay almost no attention to unless they're downright brilliant, but here they really managed to make me roll my eyes and thank fate I mostly listen to music where lyrics are being growled/shrieked, and thus are incomprehensible. Typical radio-rock trite taken to the maximum.

While I wouldn't exactly call Dedicated To Chaos a complete abortion, like some other 2011 offerings I could think of, it's nowhere near the realm of even decent, let alone good. To be completely honest, there are a few enjoyable moments and riffs, even some very nice saxophone passages, but those are about as common as penguins in Africa. This album could probably appeal to non-metal fans, and I could definitely see some tracks featured as popular singles among the classic rock crowd. Unfortunately, those folks aren't frequenting this site, I imagine. Avoid like a murder-crazed, plague ridden lion armed with a tactical nuke, unless you consider you'd fit into the group mentioned above.