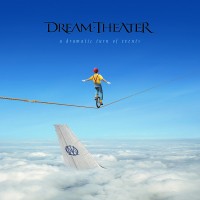 * The limited Deluxe Collector's Edition of A Dramatic Turn of Events includes a second disc with instrumentals of all the tracks.
* "Bridges in the Sky" was originally titled "The Shaman's Trance".
* A Dramatic Turn of Events is the first Dream Theater album to feature lyrics by bassist John Myung since "Fatal Tragedy" from Metropolis Pt. 2: Scenes from a Memory.
* Paul Northfield is credited for the spoken words in "Breaking All Illusions".