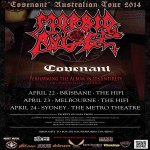 In a surprising announcement, death metal legends Morbid Angel have announced that they are bringing their Covenant tour to Australia. Yes, that's exactly what you think it means. They are playing the whole Covenant album from start to finish, and a few classic goodies after that, of course.

The band performed the entire Covenant album in the US last year. Morbid Angel will be playing in Australia immediately following the two Kabuto Metal 2014 festival performances in Osaka and Tokyo, Japan.