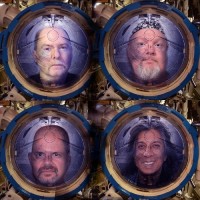 Rob Gravelle, guitarist of veteran Canadian heavy metal act Ivory Knight, has released a remixed version of the band's song "Rejected," taken from the 2018 album Unity. "Rejected" is the opening song on the album, which was Ivory Knight's first since returning from a lengthy hiatus in 2013 and third overall. The first two albums were both mixed by Jeff Waters of Annihilator, with whom members of Ivory Knight have been involved for many years (with former drummer Paul Malek appearing on Annihilator's first two demos, Welcome To Your Death and Phantasmagoria). Unity, however, was not mixed by Waters, and Gravelle, who occasionally releases songs under his own name, decided to revisit it. The new mix of "Rejected" can be streamed on his Soundcloud page.