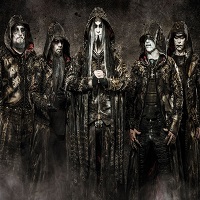 Norwegian symphonic black metallers Dimmu Borgir have finalized the track listing for their new album, "In Sorte Diaboli", due in North America on April 24 via Nuclear Blast Records. The CD will arrive in Europe on April 30 (April 27 in Germany).

"In Sorte Diaboli" was recorded and mixed at Studio Fredman in Gothenburg, Sweden with producers Fredrik Nordström and Patrik J. Sten. A limited-edition digipack version of the CD will include the bonus cut "The Ancestral Fever" along with a bonus DVD containing the video for the album's opening track, "The Serpentine Offering", shot by director Patric Ullaeus of Sweden's Revolver Film Company. Ordering information on both the regular and digipack version can be found at www.cdon.com.

01. The Serpenitine Offering
02. The Chosen Legacy
03. The Conspiracy Unfolds
04. The Ancestral Fever (bonus track)
05. The Sacrilegious Scorn
06. The Fallen Arise
07. The Sinister Awakening
08. The Fundamental Alienation
09. The Invaluable Darkness
10. The Foreshadowing Furnace

As previously reported, Nuclear Blast Records has launched a special "In Sorte Diaboli" news page at this location.

Dimmu Borgir guitarist Silenoz previously told Revolver magazine that the songwriting and recording process for the group's long-anticipated follow-up to 2003's "Death Cult Armageddon" involved none of the intensive pre-production of their last two discs, no demos, and no gallinvanting around with the Prague Philharmonic Orchestra. "It's definitely going to sound way more epic and bigger than we thought, because Mustis [keyboards] has also contributed with his keyboard ideas," said Silenoz. "I have to admit that some of the keyboard things on 'Death Cult Armageddon' sound better on the demo version than [their symphony versions] on the album. I probably shouldn't say that, but it's true."

This will be Dimmu's first concept album, a story set in always-epic Medieval Europe that also serves as a treatise on the modern-day political and social abuses of organized religion. "There's this dude that works as a priest's assistant, and after a while he just discovers that he has nothing to do with Christianity," said Silenoz of the storyline, which he conceived in full before even a note of music was composed. "He just sort of has this awakening and realizes that he has different abilities and different powers and is leaning more to the dark side."