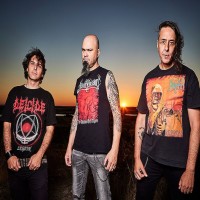 The Spanish death metal band Deimler have sealed an agreement with Xtreem Music for the release of their first long player, entitled A Thousand Suns. The latter is nearing its completion and will be released in October. Additional details to be unveiled in coming weeks.

The origin of Deimler dates back to 1998, dissolving in 2002 until in 2018 it was reactivated through one of its founding members, Pako Deimler (Funëdeim) on guitar/ vocals, who is also active in bands such as Famishgod, Dimenssion, Itnuveth and several more. The band's debut EP Zeron One was released in 2020 through the Chinese label Awakening Rec. and had an excellent reception in the underground scene with its style of heavy and brutal yet melodic and catchy death metal with strong roots in the sound of the Finnish and Swedish schools of late 80's and early 90's with influences from bands like Demilich, Carnage, Dismember, Avulsed, Funebre, Entombed, Grave,...