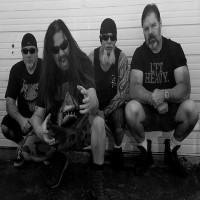 Death metal legends Massacre have released a visualizer video for their latest single "Ruins Of R'lyeh", taken from their upcoming fourth album Resurgence, which comes out on October 22nd via Nuclear Blast.

Vocalist Kam Lee comments: "I'm going to take you back down into the abyss! This track, "Ruins Of R'lyeh", like many of the other's on the Resurgence album are direct sequels to tracks off From Beyond. With a purposeful musical connection to the track "Cryptic Realms", this new song of O.S.D.M. takes the listener back down into the depths of the darkness with a very heavy laden Lovecraftian lyrical direction loosely based on 'The Call Of Cthulhu.' Ph'nglui mglw'nafh Cthulhu R'lyeh wgah'nagl fhtagn ('In his house at R'lyeh, dead Cthulhu waits dreaming.')"