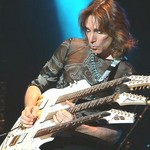 Guitar legend Steve Vai has announced that his new album, Inviolate, will be released on January 28th, 2022, with a vinyl pressing out on March 18th. The album's first single "Little Pretty" can be streamed below.

Vai commented: "My new record Inviolate drops January 28th, 2022. It’s the culmination of 61 years worth of inspiration and training. It oozes delicious melodies and fierce pyrotechnics. It will also lift you up to levels of delight that will make the rest of your life a beautiful experience… well, maybe not but… close. Pre-order it by heading over here."