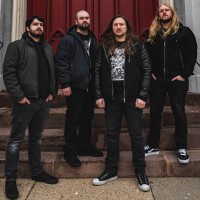 Death metal four-piece from New Jersey, Hath, disclose details and first single in connection with their newly announced studio album. Entitled All That Was Promised, it has been set to land in stores on March 4th through Willowtip Records. Engineered and mixed by AJ Viana at AJ Viana Productions, mastered by Alan Douches at West West Side Mastering. Artwork created by Adam Burke. "Kenosis" track serves as a first taste of what to expect from this sophomore full-length outing.


The band released the following statement concerning the new album: "All That Was Promised was our first time writing as a 4-piece, and we feel like we've further developed who we are as a band. We set out to expand on what we did on our previous releases, experimenting with more varied sounds and new ideas, but we wanted this record to be more direct and cohesive. In the end, we ended up with an album that's darker and more punishing than we expected.

"It's important to us to grow and learn, but without losing sight of what we do best. The content on this album is more personal and introspective, with songs about enduring change and all the promises made to us in life, broken and otherwise."