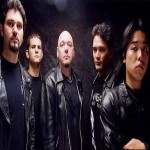 Paul Di'Anno, who has been receiving physiotherapy and lymphatic drainage treatments in Zagreb (Croatia) in preparation for his upcoming knee surgery, has teamed up with several Croatian musicians to form a new project called Warhourse. Recently they have entered the studio to record three songs, two of which - "Stop The War" and "The Doubt Within" - will be released as a special DVD single along with Paul's video message to all fans who bought this single and thus helped raise funds for his upcoming operation. In addition to the single, each customer will receive a special event t-shirt, designed by Robert Štivičić (Crusader Art),made for Paul's first concert in seven years, which will be held in Zagreb on May 21. Stay tuned for more news to follow.


Line up for this project: