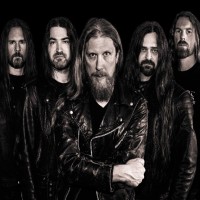 Swedish death metal bringers Death Reich are ready to release their second EP, The Final Plague, on the 2nd of December via Non Serviam Records. You can now watch the official video of the opening song, "The Final Plague", via YouTube.

Statement from the band: "We are really proud of this EP. We think it represents what we are all about both musically and lyrically. The EP contains four original songs that differs from each other but still remains within the realm that is Death Reich. The EP also includes a tribute to the mighty Entombed."