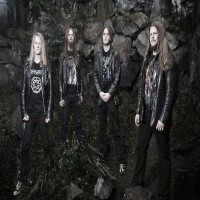 Swedish death metal formation Desolator confirmed that after 10 years in service, drummer Victor Parri has decided to leave the ranks. He will now focus on other music projects.

The band commented: ''After 10 years with the band, Victor Parri has decided to step away from the Desolator drum throne to focus on other projects. Victor first joined Desolator back in 2012, just in time to record the drums for our very first full-length album, Unearthly Monument, and has been a huge force behind the drums ever since. He helped drive the band's sound progression on both the Spawn Of Misanthropy EP and the latest album, Sermon Of Apathy, and we couldn't be happier with his performance over the years!

"Apart from the studio recordings, we've shared many great memories together: playing festivals and shows both big and small, before/after parties, adventures in the desert of Mallorca (no taxi in Santa Maria) and just had a good time in general. Desolator has grown in many ways since then, both on and off stage, in no small part due to Victor's fantastic playing, and we wish him the best of luck in the years ahead!''