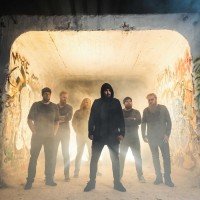 Melodic death doomsters Marianas Rest announce Auer, their fourth full-length instalment. The 8-piece new music effort was recorded and mixed by Teemu Aalto, and mastered by Svante Forsbäck. Gogo Melone took over the creation of the album's cover artwork. For a first preview, give a listen to the "Diseased" single (via YouTube or Bandcamp).

Vocalist Jaakko Mäntymaa comments: "Today we are proud to present the first details about Auer, the most musically diverse of our albums so far. It is a story about the never ending dance of shadow and light. Humankind repeats its mistakes, but there is beauty amongst chaos."

Bassist Niko Lindman adds: "We broke traditional song structures and seasoned the atmosphere slightly with clean vocal parts. The very core has still not essentially changed much as the album continues the “there is still light at the end of the tunnel, maybe” atmosphere familiar from the previous albums."