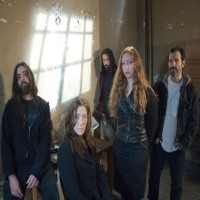 One of the most respected metal bands in the Bay Area, Ludicra, have completed work on their anticipated follow-up to 2006's Fex Urbis Lex Orbis.

Entitled The Tenant, the new Ludicra album sees the five-piece at the height of their musical powers by delivering an album which incorporates all the best moments from Ludicra's illustrious back catalogue and incorporating a much deadlier metallic attack to the diverse sound canvas in which they harbor. With the black metal influenced blueprint Ludicra laid down with their elusive Hallow Psalms debut, along with incorporating a vicious punk vibe and adding tasteful splashes of neo-folk, the band took it to the next level with their Another Great Love Song follow-up. With Fex Urbis Lex Orbis, Ludicra had created their most progressive and musically complex album to date, an album that just recently landed in the #51 position in Decibel Magazine's special 100 Top Albums Of The Decade issue.

The Tenant, while being the most metal-sounding Ludicra album to date, is an album where all of Ludicra's influences culminate into an epic audial journey through a sprawling and harsh urban landscape, one in which its members have dwelled and roamed within during the band's decade long career. With their black metal influenced sound which initially cemented the basis of where Ludicra would expand their sound from, and that is still quite evident on The Tenant along with the neo-folk and experimental dabbling, Ludicra continue to take their progressive edge even further while at the same time, building upon their vision by taking it into more expansive ground.

Along with Ludicra's reputation as one of the best metal bands in the Bay Area, the reputation has its merits due to the band's ability to put on one of the most vicious live sets you'll ever witness from any metal band. This will be displayed in full force this spring, when Ludicra will be hitting the road in support of The Tenant. An announcement concerning an upcoming Ludicra tour shall be announced very soon once everything is finalized and once we've been given the go-ahead to do so.