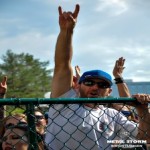 I survived another year of mayhem and just as the prior ones, this year's Rockstar Mayhem Festival had a smorgasbord of new and old fan favorites.

Ever since Ozzfest got canned here in North America, the opportunities to see a large amount of bands in form of a traveling festival are far and in-between. Ok, I guess there is the Warped Tour and the Uproar Festival among others, but most of those do cater to a more specific audience, while the Rockstar Mayhem Festival has something for everyone's musical taste.

The day started with the usual hurry up and wait - get there early since the gates open up at 1pm - stand in line because the guest-list and press pass window doesn't have their shit together and tells the probably 100 plus folks they will be ready to hand out passes by 12.30. I felt bad for the non-press people since they, after receiving their credentials, had to go into another long ass line to actually enter the Amphitheater. What a "Charlie Foxtrot"! 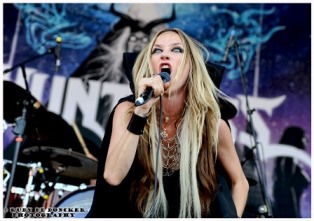 © Rudy De Doncker - permission to use granted
And to add to this rant; the first band of the day, LA's Thrown Into Exile, was scheduled to go on 10, yes TEN minutes after the gates opened. Sure - let's try to get into the place, walk over to the side stages AND do this all in less than 10 minutes? For real? Honestly, I have no clue how many people actually made it for their set, but friends of mine where still stuck in line for another hour plus.

Got it, there has to be security so that nobody brings in water bottles with their caps still on, or nobody tries to "smuggle" in an open pack of cigarettes.

But to be fair, security did leave those patrons alone who brought a six or twelve pack of beer as a "standing-in-line-for-hours-refreshment-beverage". One has to take the good with the bad I guess.

We totally avoided all the lines and just went around the back, straight into the press area - win. Well almost win, since we were stuck there for interviews during most of the happenings on the side stages and did miss tons of bands playing. And speaking of side stages; because of the sheer location of the Amphitheater, the Colorado edition of the Festival can only accommodate two of them (last year we only had one side stage), and we also never get to see the awesome motorcycle show performed by the Metal Mulisha. 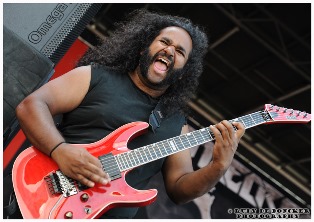 © Rudy De Doncker - permission to use granted
Anyways, we ventured onto the festival grounds to check out some of the merch tables, locate the four dollar beer tent, and quickly check in with the media coordinator.

Well, not so quickly as it turned out; she informed us that Children Of Bodom is running early and will be available for interviews momentarily. Needless to say, the choice between watching Huntress on the second stage or having a chat with Alexi Laiho (LINK) was a no-brainer. Luckily I will be catching Huntress later this year and one of my peers, friend and one of the best photographers in the biz, Rudy De Doncker out of Belgium, send me a couple of his pictures.

Scheduling issues from hell and before I could wander off, Frankie from Emmure was sitting in front of the camera and talking about all kind of things (LINK). Thankfully I managed to catch the last couple songs from Attika 7 and I can't wait to see them again. Heavy metal, crushing guitars and Evan Seinfeld (ex-Biohazard) on vocals - yap, dig it.

I didn't even try to make it over to the other stage to check out Battlecross. The side stages were positioned on opposite sides of the festival grounds, and even though they were only about 400 feet apart, counting in the mass amount of people standing and walking, it was an intense undertaking. Once again, thanks to Rudy De Doncker for the picture.

I opted to watch Born Of Osiris's crew get the stage ready for their band's performance and actually stuck around for most of their set before heading back to the press area for a scheduled interview with Huntress. Unfortunately their front woman Jill Janus was unable to make it that day, so we had a nice little conversation with guitarist Blake Meahl instead (LINK). 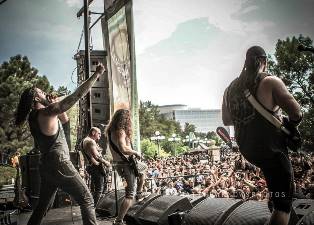 © Matthew Zinke - permission to use granted

Dude is a serious trip and so nice; and the tour he couldn't tell me about toward the end of the interview actually got announced a couple of days ago. After their run with Danzig, Huntress will be on the road again later this fall as the opener for no others than Testament, Killswitch Engage and headliner Lamb Of God. For tour dates please check HERE.

Socializing, talking, drinking and therefore totally missing Butcher Babies and Motionless In White before sitting down with Amon Amarth's guitarist Olavi for the last interview of the day (LINK). I met him a couple of times and it is always nice to just chat and catch up.

Since the scheduling conflict bug struck again, Job For A Cowboy played during our interview, but since I have seen them about a million times over the years it was no big deal. It always sucks when you are RL friends with a band and can't make it to their show, but I informed them ahead of time so all is good. My buddy over at Matthewknowsphotos did witness their apparently awesome set. 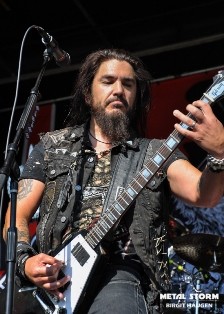 Like I already mentioned, the grounds in Colorado can only accommodate two side stages, so all the bands which were scheduled for the Sumerian Records Stage didn't play and most didn't even make the drive to Denver. So after watching a song or two from Emmure I fought (literally, no shit) my way through the crowd, which was already MASSIVE in front of the Jägermeister Stage, for the mighty Machine Head. Of course they opened with "Davidian" and didn't miss a beat in their entire, way too short btw, 35-minute performance.

I hadn't seen them in a while, and after Rob Flynn was hospitalized right before their gig in Denver on the Dethklok tour, I enjoyed every minute of their set. Kick ass! Machine Head played a couple years back already on Rockstar Mayhem, but this time they opted for a side stage slot instead of being the opener on the main stage. In my opinion this was a smart move since the crowds are way more intense on the side stages. 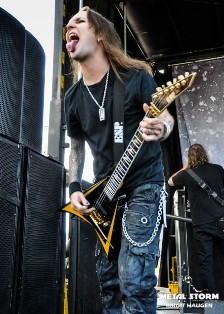 Since, after leaving the photo pit, I was already half way between the two stages it took me no time to make it over to the Musician's Institute Stage to watch the last band before everything started on the main stage. Yes, Children Of Bodom put on a great show (I personally prefer them in a club setting though), but since they were the last side stage band, a lot of people left early to get situated on either the lawn, their seats or the pit area of the Amphitheater. Well, at least in Denver, no clue how it was in other cities. To see what all they played click HERE; it's pretty accurate.

Again, I prefer to watch CoB in a venue where they can do their lights and fog and what-not-ever, but hey, now that their new album Halo Of Blood (read the review) hit the streets, I am sure they will tour North America sooner rather than later.

I headed over to the main stage since there was no way I was going to miss even one second of Amon Amarth and especially since they brought their ship as a stage prop (LINK) - and then I almost cried when I saw that it wasn't there. SUNOVABITCH! The stage was just not deep enough to accommodate the entire ship and so they just had Fredrik Andersson's drum kit up on the platform.

Well, other than that, their performance was awesome as usual. With 35 minutes of playing time, their set-list was as expected (check the gallery); oldies but goodies, with just the title track off their new album Deceiver Of The Gods thrown into the mix. It was pretty cool that they switched the backdrop right before they played the song. 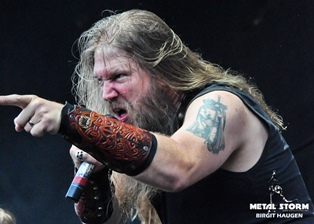 Up next was Mastodon, and while I do like them, they kinda were out of place right after Amon Amarth. I apparently wasn't the only one who thought so, since after two songs, most of the audience sat down on their seats instead of rocking out while standing. A shame actually, but then again, Mastodon is also a band best watched in a club setting. Other than "Megalodon" and "Crystal Skull" I believe they played only songs off their 2011 album The Hunter. With 45 minutes of playing time you would guess they would have a more rounded set-list, weird.

To be honest, myself and most in attendance would have taken Children Of Bodom on the main stage (since they do have a new album out) and Mastodon playing their sludge over on the side stage. But hey, what do we know.

Then it was time for Five Finger Death Punch to liven up the audience again. Say what you will about them, they fucking BRING it during their live performance; hands down. And while the band originated in California, their vocalist Ivan Moody is a Denver native and therefore EVERY Five Finger Death Punch gig here is celebrated as a home town show. 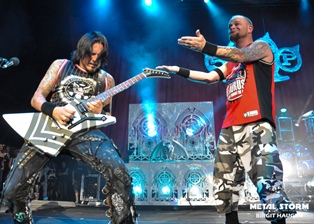 "Under And Over It" started off with a bang and really set the stage for an outstanding performance. During "Bad Company" it wasn't even necessary for Ivan to sing, since I bet 90% of the roughly 17,000 people in attendance sang the song just as loud and well as he did. As a matter of fact, their entire set was heavy on crowd participation, and by the time the last song ("The Bleeding") ended, even my voice started to disappear.

Kick ass show. I have seen Five Finger Death Punch tons of times, even when they just started out, and they always bring the party, they always engage their audience and the bigger they get, the better their shows turn out.

I could have left the festival right then and there, but I thought I would give Rob Zombie another chance. Don't get me wrong, I dig this stuff, but over the last couple of years I also think he got too big for his britches and the music suffered in exchange for an elaborate stage show. Long gone are the times where he is on stage wearing a pair of jeans and a T-Shirt. Noooo, now we need to have costumes and ridiculously huge stage props.

Not dissing on huge stage productions here, but if the props and lights and costumes are more in the foreground then the music being played - well you are the judge. Nevertheless, Rob Zombie put on a great show and did play three new songs off Venomous Rat Regeneration Vendor alongside a couple of White Zombie hits and of course the always in the set-list Grand Funk Railroad cover "We're An American Band". 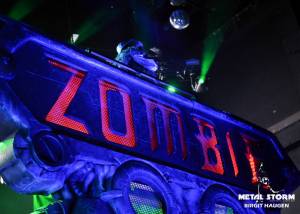 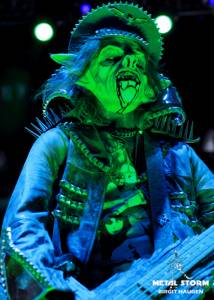 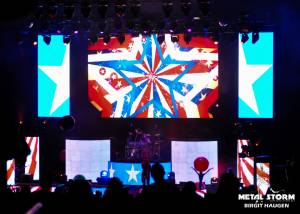 The evening ended with the ever so popular "Dragula" off his 1998 solo debut album Hellbilly Deluxe, but we only heard it in the distance on our way to the car. Apparently a huge canon shot confetti all over the crowd at the end of the song and since it was raining at this point, all those little pieces of paper got stuck on everyone's skin.

So, another Rockstar Mayhem in the bag. I tell myself EVERY year that the next one I will not work but rather just go to hang out. Let's wait and see - stranger things had happened.

Make sure you check out all of the interview and the entire photo gallery from this years Rockstar Engergy Drink Mayhem Festival.