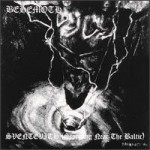 Many of my favourite black metal bands come from Poland, and in general I find the Polish black metal scene the best of all black metal scenes. Yet, it never receives the attention I think it deserves and this is why I decided to write this article. This is not a complete history of Polish black metal, instead I have chosen to focus on my personal favourite bands (and to mention a few of the earliest bands ). What I find sad about Polish black metal is that so many bands have nazi sympathies. Since I hate Nazism I have tried to avoid the band with such opinions, although one band couldn't be excluded when discussing the scene.

The earliest Polish band I have seen being labelled black metal is Kat. Kat formed in 1979. They were initially more of a heavy/speed metal band and later thrash, but their second album 666 (which also is my favourite by them), was released in 1986. 666 is sometimes clumped with the first wave of black metal albums, although it is more of a heavy/speed album. Anywaym it's a great album.

Next came Pandemonium. Pandemonium were formed in 1989 and released their debut album The Ancient Catatonia in 1994. They call their own music "satanic dark metal", and personally I would say they are more death metal than black metal, with an element of doom metal included. They would later change their name to Domain, releasing 3 albums under this before before changing their name back to Pandemonium. They would then continue to release albums under this name.

Another early Polish black metal band is Christ Agony, formed in 1990. They released their debut in 1993 with the album Unholyunion, and is therefore (to my knowledge) the first Polish pure black metal band to release an album. Christ Agony also had an element of death metal in their music.

The band that would come to shape Polish black metal more than any other band is Graveland. Graveland was formed in 1992 and released their debut in 1994 titled Carpathian Forest. They would later turn more and more into a viking metal band. The members are also have many side projects. Since the members of the band are Nazis, I prefer to not discuss this band too much (and also because I find their music very boring compared to many other Polish bands). However, they have been far too influential to leave out of this article. As far as I have understand, Graveland never used any Nazi-references in their lyrics (so I'm not sure why they are blacklisted on this MetalStorm when so many other bands with Nazi sympathies are here, but that is another discussion).

Next we have the band that is my personal favourite black metal band of all time, Behemoth. Behemoth was formed in 1991, and would later grow into the biggest death metal band in the world, but they started as a black metal band. They released their debut in 1993 with the EP And The Forests Dream Eternally and their first full release came in 1995 with Sventevith (Storming Near The Baltic). Sventevith (Storming Near The Baltic) is my favourite black metal album ever. One thing I like about this album is the variation. While most black metal albums sounds similar throughout the whole album, Behemoth take each song in a different direction. Here you can find some semi-symphonic material, an acoustic interlude, ambiance, some brutality, but also (in my opinion most important) great melodies, without ever being too catchy. This means they still maintain the raw atmosphere, something most black metal bands lose when they incorporate melodies.

In 1996 Behemoth released their second album, the almost equally brilliant Grom. Here they have incorporated folk influences, including the use of acoustic guitars and some female vocals. Behemoth's third album, Pandemonic Incantations from 1998, is also a great album I have to mention. Here they have started moving more towards the death metal genre, which they would approach more and more down the line. For many people their fourth album Satanica is where they started to become really interesting, but for me it is where I start to lose my interest in them. I claim their first three albums as their best, and three of the entire black metal genre's best albums.

A much overlooked Polish black metal that never would reach any fame is Hefeystos. They were formed in 1994 and in 1996 they released their self-titled album, which is their only black metal album. This album is very beautiful and atmospheric, but not very aggressive. It includes some female vocals and is often labelled as gothic black metal. It would probably appeal to fans of early Behemoth, at least it appeals to me. Hefeystos would only release one more album, but in a more progressive style.

Another great early black metal band is Besatt, formed 1991, but releasing a debut in 1997. They have released eight albums to date, most albums are great, but a criticism is that all of their albums sound very similar to each other, and lack originality. Besatt mentions bands like Gorgoroth, Darkthrone and Bathory as influences, but I found their music a bit more accessible. If you're interested in them, I think you could start with any album, but I would recommend Sacrifice For Satan from 2004 a little more than the others.

Mastiphal was formed in 1991, and would release the album For A Glory Of All Evil Spirits, Rise For Victor in 1995. This album contains a heavy use of keyboards, and could be described as semi-symphonic black metal. This would be their only release until 2011.

Some of the members in Mastiphal would also play in the band Darzamat. Darzamat was formed in 1995 and released their debut in 1996 with the symphonic black metal album In The Flames of Black Art. This album would also include some female vocals. Seven years later released their follow-up, transforming into a gothic metal band. In my opinion the debut album is still my favourite album by them.

Mgła was formed in 2000. They performed first on a split 2005, but released their own material with the EP Presence in 2006. They have since released two more EP's and two albums, all of them are recommended. Their music is closely comparable with Lutomysl from Ukraine. Both members of Mgła are also in the black metal band Kriegsmaschine.

The last band I want to mention is actually a one man band and is called Evilfeast. Evilfeast released their debut in 2004, and have released four albums so far. I recommend all of them. The style is atmospheric black metal, comparable to early Gehennah