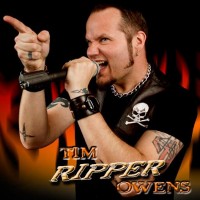 Back in 2011, when he reviewed Charred Walls Of The Damned's Cold Wind On Timeless Days, Doc Godin made a statement about Tim "Ripper" Owens that wheedled its way into my head and has stuck with me ever since. Our erstwhile editor-in-chief observed that Owens, while an accomplished vocalist and an established personality within metal, is "known better for his talents than any type of legacy with dynamite albums." Here is a man with the voice of an S-rank frontman and no magnum opus to his name.

While Owens has recorded a number of stellar songs and has proven his own prodigious talents time and time again, every album he has appeared on has fallen short of the mark in some way: too spotty, too thin, too unremarkable to live up to the potential. As the good Dr. Rock goes on to state, Ripper has plenty of shining moments: just see Charred Walls's "Ghost Town" or "The Soulless," IE's "Declaration Day" or "Ten Thousand Strong," or Priest's "Cathedral Spires," to name a few. But if you wanted a full album of Owensian greatness, and not just a mixtape?

This situation strikes me as odd. First of all, if I were to guess - and it is just a guess - I'd say that most bands out there have at least one, maybe two records that stand out amongst the rest, to which fans could point and say, "This defines their sound," or, "This is their greatest work." In the same vein, and, indeed, as a result, most of the well-known vocalists in metal have a couple of albums that have stood the test of time as cornerstones of their bodies of work - you know, that album that they might one day play live in its entirety on the 10th or 20th anniversary or something. Every notable frontman from Alan Averill to Zack de la Rocha has a Holy Diver, a Keeper Of The Seven Keys, an Abigail, or a Powerslave - if not something so monumental, then something central to their band or their own career. Ripper's predecessors have their Sad Wings Of Destiny and Something Wicked This Way Comes, for example, and I'm even going to give Yngwie Malmsteen's Rising Force to Jeff Scott Soto, despite that album being all about the man with the flaming Stratocaster.

Second, Owens has worked with a variety of well-known metal artists, at least one of whom, statistically, should have come out with something earth-shattering during Owens's tenure. The most obvious is the aforementioned Judas Priest, but immediately after his departure, he moved onto Iced Earth, easily the biggest band out of the US power scene whose name doesn't rhyme with "Nanowar," and from there partnered up with everyone's favorite blouse-wearing, Ferrari-driving, jewel-encrusted Swede, Yngwie Malmsteen. On the side, Ripper has dabbled with the band that inspired this article, Charred Walls Of The Damned, a supergroup rounded out by the extremely talented and prolific Steve DiGiorgio, Richard Christy, and Jason Suecof. Play My Game, released under the name Tim "Ripper" Owens, featured dozens of guest musicians, including Dave Ellefson, Vinny Appice, Jeff Loomis, Bob Kulick, Rudy Sarzo, Chris Caffery, and Bobby Jarzombek. Just for good measure, Owens still has Beyond Fear lurking out there somewhere. He's a prolific man. If he doesn't have one defining record, it's not for lack of trying.

Third, the Ripper has a superhero-worthy origin story that ranks among heavy metal's most venerated myths: the legend of a young man fronting a tribute band who serendipitously finds himself the new lead vocalist of his favorite band/namesake is a tale that anyone can appreciate, especially if that band is Judas Priest. Evidently somebody else thought so, too, because the tale was (loosely) adapted into the 2001 film Rock Star, starring Mark Wahlberg as the Ripper analogue for reasons that escape me. I've never seen the movie and likely never will, since it suffered an unimpressive box office showing and critical reception, and seems to be a mish-mash of boring hair metal/radio rock clichés belched out by Hollywood stiffs who wouldn't know heavy metal if it poisoned their tuna and killed them. I did, however, recently re-watch The Departed, and I have decided that that will suffice instead. Quality of the adaptation aside, Owens's story has some universally appealing quality to it, and even though good stories don't necessarily make for good careers, I feel in my heart that it would have been narratively and thematically appropriate for Ripper to burst forth from the shadows with Painkiller II: Painkillerer rather than the merely solid Jugulator.

It might seem that I am prematurely drawing Ripper's career to a close; after all, the man is only 49 years old and hopefully has another couple of decades in him, during which time he could come out with a genre-defining classic that once more turns the heads of metal fans everywhere in his direction. I feel like I'm giving him a Lifetime Achievement Award - a subtle way of saying, "Thanks, now move along." That's not my intention - nor am I complaining about the unfairness of it all. This isn't a "Justice for Tim" article. All told, the guy has had a pretty fabulous career, even without one major, defining album behind him, and not everyone achieves a masterpiece, no matter how many times they try. The man still sang "Setian Massacre." C'est la vie. As I said in the beginning, this just strikes me as odd. It's curious.

To rectify this situation, I'd like to offer my own nomination for Tim Owens's epic, legacy work: Iced Earth's "Gettysburg (1863)." In fact, I think it should be quite obvious that "Gettysburg" is the most grandiose and deserving recording that Owens's career has yet produced; nothing else even comes close. The only thing holding it back from being Owens's standard-setting album is that it was never released as a discrete piece of music and is therefore bound as part of a larger body of work that doesn't quite live up to it. Sure, there was the Gettysburg (1863) DVD package from 2005, but that was a three-hour-plus sweet shop for the superfan, featuring interviews and battlefield tours and a lot of other stuff that wasn't the song itself. At 32 minutes in length, the three-part epic "Gettysburg" could very well have been its own studio album, or at least an EP, and given that it ranks more than a cut above the rest of the material on The Glorious Burden (much as I like that album), and simply how different it is, I think it deserves a separate release. That album/EP would be the definitive Tim "Ripper" Owens recording, to say nothing of where it would stand in Iced Earth's own discography. It's worth asking why I'm so set on making a defining piece of music a studio album and not merely a song or collection of songs. Albums are more substantial and varied, and have the chance to explore much more of what makes a singer/band great; I think fans of an artist, and metal fans moreover, tend to judge a career by full albums and not merely individual snapshots of music from various eras. In fact, a better question would be on whose authority I've decided that the rest of Ripper's discography is too inconsistent to properly define him. The authority is my own, because this is my opinion. Let's get back to the song.

"Gettysburg" is a true masterpiece. It's a densely layered tour de force, a blow-by-blow of one of the most monumental tragedies in American history and the largest battle ever fought in this half of the world. Despite its sheer size, the three parts have endless hooks and memorable vocal lines delivered with visceral emotion. Ripper really outdoes himself constantly throughout the song, whether he's shrieking General Reynolds to death, whispering the impending doom of the Union flank, or wailing Robert E. Lee's ultimate despair. It's not only an epic, powerful, and moving song, it's a playground for Ripper as a vocalist; sometimes I'm even in a mood to consider it Iced Earth's greatest work, in addition to Ripper's individually. "Gettysburg" ought to suffice as Ripper's magnum opus.

Though I'd largely finished writing this article before the announcement was made, this publication comes shortly after the news broke that Ripper is working on a new project with guitarist Chris Caffery of Savatage and producer Roy Z, known also for his work with Bruce Dickinson and Halford. Though Ripper's last release was only last year (Charred Walls Of The Damned's very solid Creatures Watching Over The Dead), it feels like it's been a while. Who knows; perhaps this new project will yield the one truly killer album that we have been waiting to hear from Tim "Ripper" Owens.