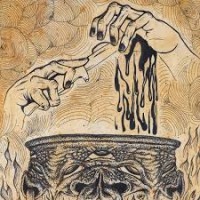 This was my first trip that led me a bit further than only a half- or one-hour ride from home. Koper is our biggest coastal city, located at the southwestern part of the country by the Adriatic sea. It's a two-hour steady ride, though this time accompanied by quite heavy rain. Nonetheless, I was visiting a small club (Youth Center) somewhere in the center of the old part of the town, almost hidden in some corner, between the old, tiny, classic stone alleys.

The main reason for attending this event was, of course, the headliner, Messa. They were supported by fellow countrymen Assumption and Slovenian doom metal quintet Mist as the opening act: a triple-doom-metal excitement for me. It had a very comfortable ambiance and was a nicely filled place, with around 150 people attending.

To begin, almost-all-female Slovenian band Mist, performing first this night, are currently one of the most promising (doom) representatives of the metal scene in our small country. A set of not much more than 30 minutes offered us some smooth, doomy atmosphere of sorcery and desolation. Mist presented their new stuff from (a very decent) debut studio album, Free Me Of The Sun, released in June 2018. Leaning mainly towards a classic doom metal sound, it reminded me also of Portland-based doomsters Witch Mountain. The one thing that I was attracted to the most (but not the only thing) during their performance was the vocals. They really give you a specific, chilling feel and actually turned out to be the main force of the whole outfit and sound out there on the stage. I'm satisfied with the performance.

Assumption were up next, the first of the two Italian performers this night. Of all three scheduled bands, Assumption brought to the table the strongest, roughest sound with their heavy death-doom offering. The band were up to present their latest full-length, Absconditus, released last year (it was also their debut, just like their predecessors). Even though I myself am inclined more to the extreme side of doom metal generally, Assumption did not evoke any special, particular movement of feelings in me. It was a solid appearance without any excessive, memorable moments to share.

And then there they were: Messa, the quartet from Cittadella that spreads a very strong, seductive vibe of many deviations around their classic occult doom metal sound colliding in one special gloomy output. A group of very creative, humble, and talented musicians is what came straight to my mind when I was observing them up on the stage. They have a very emotional approach that drags you immediately into some kind of subordinated mental state, relating to their music. Their latest offering, Feast For Water, is also one of the main reasons that I attended this gig in first place, because I wasn't aware of this band before it (one of my favourites of 2018). However, this performance was much more, a full-on impressive, possessive impact. Yes, and that woman. Wow. Almost fell in love with her. Sara's haunting and mesmerizing vocals are surely a top-notch achievement live to accompany already sensational music. If you have a chance to see Messa live, do not hesitate; just be their witness. 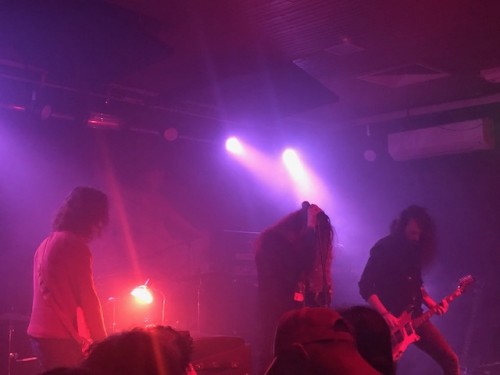 So I returned to Zagreb, this time to a different venue from the two that I attended earlier. Culture Factory is a significantly bigger venue, with capacity of around 800-1000 people maybe, and this time was booked for American stoner rock/metal quintet Monster Magnet. Well, they surely did not reach this number of attendees. I don't know if it was surprising or not, but I did expect a more filled place. This date was one of the last ones of their one-month-long tour.

The group, led by charismatic and energetic frontman Dave Wyndorf, was performing as part of their 'European Mindfucker tour', supporting the release of their latest full-length, Mindfucker. However, as you are able to see (below the article), the set list featured "only" two new tracks, though it must be mentioned that, with 13 tracks on the set list, the length of the show hit around 75 minutes, maybe a little less than that. Not stretching too hard/far regarding this. 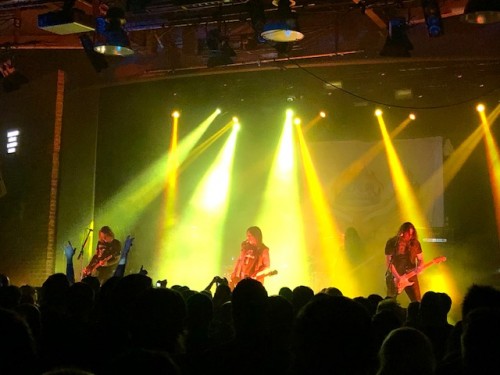 With the first two opening tracks, Monster Magnet's intro was quite explosive, lifting the whole ambiance and the crowd up to the right state. Afterwards, it kind of settled down for a level or two. Dave was putting in all of his effort, trying hard to engage the crowd through the whole show, sometimes more successfully, sometimes less. I got the feeling that the "mood set" was like being on a roller coaster ride, up-down-up-down, twisting all around. I was observing them from the back at first, before moving closer to the right side of the stage, where I had a quite nice close-up view to the guitarist Garrett Sweeny, who truly is a "riff-meister".

The classic "Space Lord" brought some more excitement as expected. Rounding out the whole show were three encore songs, concluding with another Powertrip speed ball - "Powertrip". I left the show with mixed feelings and less sobriety. Maybe I'd expected too much from the whole gig; maybe I drank too much "Žuja". Nevertheless, I must say, I was still having a good time. So, Monster Magnet, come again...

OK. Back to our main city for one hell of a music package: an all-in Australian line-up, with four groups appearing this evening. Deathcore outfit Aversions Crown and tech-death machine Psycroptic as co-headliners, Hadal Maw and Hollow World as supporting acts on this trek. Tasmanians Psycroptic will definitely bring the biggest interest to my aural senses, also presenting their newest effort, As The Kingdom Drowns. All in all, I'm expecting some intense (not that brutal though), fearless performances.

This time I'll be headed on the longest trip so far. Salzburg is approximately a four-hour ride (one-way of course) and this event will happen in the well-known venue Rockhouse. The acts of this gig will be German tech-death metal machine Obscura (as a headliner), supported by two American groups, Fallujah and Allegaeon, while Canadians First Fragment will appear as the opener. Again, a lot of technical death metal to be served, especially combined with the previous event. Hopefully it won't be too much for me.