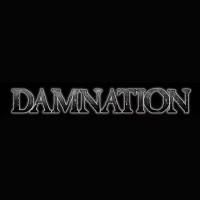 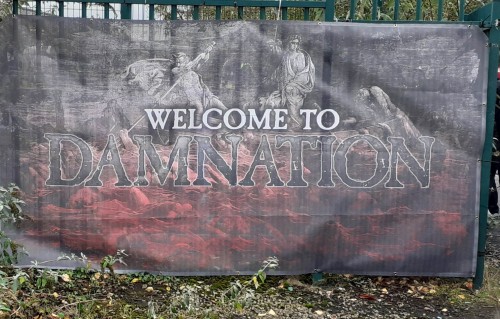 And so it came to pass, my last festival of 2022 and, after news of the postponement of the Kreator/Lamb Of God tour, my last live event of the year. With so many last of's, it is nice that they are counterbalanced by this being my first ever venture up to Manchester for the newly relocated Damnation Festival. Long established as one of the premier festivals for metalheads on the British isles, it is almost a rite of passage for those who have long fallen down the metallic rabbit hole, such is the reputation the festival has established for itself. 2022 marks the festival's biggest event to date and its inaugural show at its new home at the BEC Arena, celebrating this achievement with a line-up that pushed the boundaries of extremity and eclecticism; Damnation Festival looked to be a bright spot in the long winter nights. 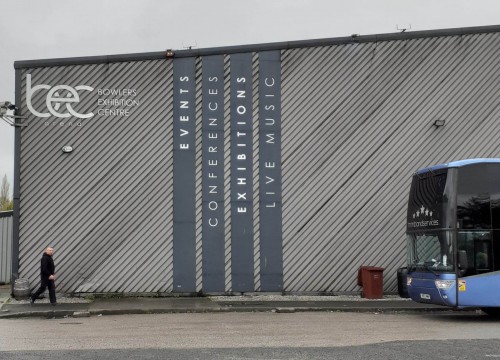 While the line-up had undergone several changes, with headliner Ministry pulling out as a result of cancelling their European tour, and Destruction and Toxic Holocaust (which went down well with me as you can imagine... no, I'm not bitter, I swear) among other cancellations, I must credit the organisers for not only being transparent with the changes, but providing some quality replacements at least. Comprising three stages, the B.E.C. was an ideal spot as a new home for Damnation: easy to maneuver around, and not feeling too crowded or easy to get lost in. Arriving late owing to transport issues, Distant were an early casualty; however, compared to other festivals this year, there was only one last-minute withdrawal, as the afterparty soundtrack Tokky Horror pulled out due to injury. 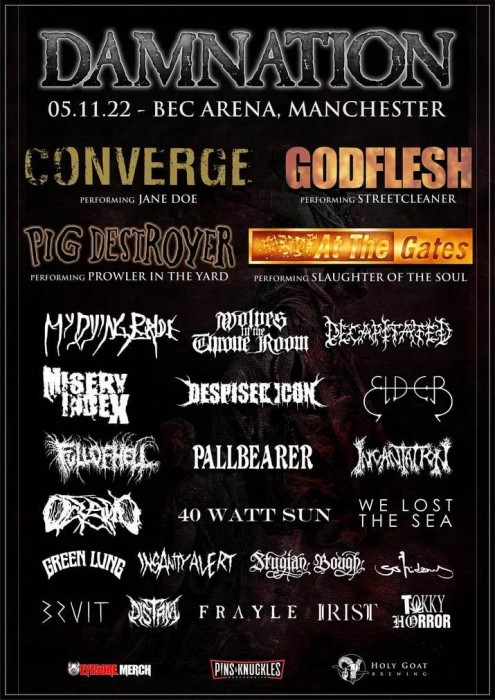 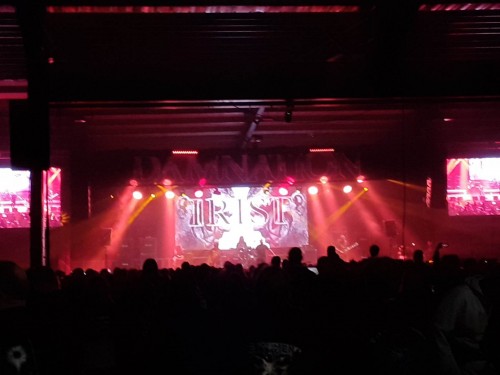 Irist my case, your honour

Starting off my slightly belated day were Irist, a band who had caught my ear and attention when they were announced for the festival. Opening the mainstage, Irist initially seemed lost before finding their groove, after which the band could let the music do the talking. With 2022's Gloria EP under their belts, the music had a lot to talk about, with choice cuts "Surging Ablaze" sitting comfortably alongside the likes of "Burning Sage". A strong way to kick off my day for sure. 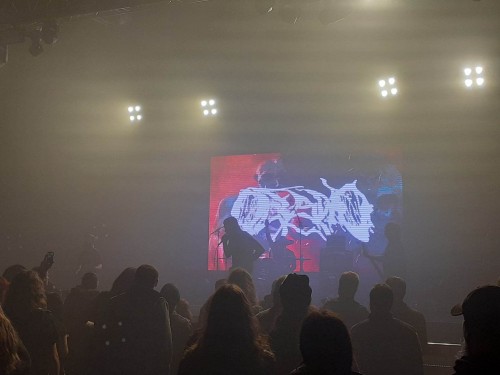 Taking deathcore back to its roots

Wanting to make up for missing Distant and get my deathcore fix for the day, my anticipation for Oceano grew. With the band being able to fit in two new cuts alongside the songs that made their name, Oceano brought a balanced and so enjoyable set for the short time they were on stage. Tight and on point, the breakdown and grooves of "Dawn Of Descent" hit hard and squarely at your chest, shaking your ribcage with each downtuned note. A powerful experience and one that I hope to witness again in the not so distant future. 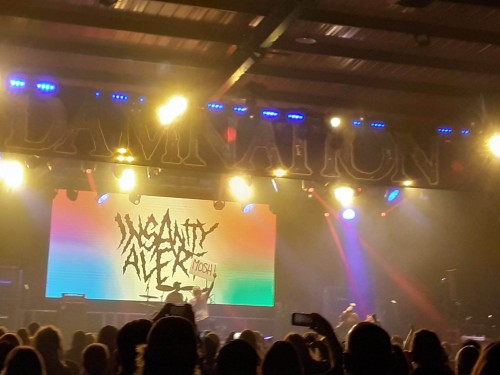 Pikachu for headliner in 2023!

The last thrash band standing, of course I was going to be in attendance to get my speed metal fix. Insanity Alert are a band who walk that fine line between party and precision, allowing attendees to enjoy the music while going suitably crazy in the pits. As the band tore through choice cuts like "Shredator" and the great philosophical question of our time, "Why Is David Guetta Still Alive?", the crowd was eager to unleash the first pits of the day with Pikachu (props to the person who brought that giant suit) leading the charge; it was a set that culminated in Pikachu crowdsurfing over the barrier as Heavy Kevy led the audience through a rousing call to arms in "Run To The Pit". Early highlight of the day for sure.

Two of the shortcomings of the festival reared their heads after Insanity Alert finished. As the venue filled up with latecomers, bar queues grew to a point that the short breaks between bands were not conducive to quickly popping to get a pint. Secondly, the Holy Goat stage could become difficult to enter if you used the main doors rather than the side doors (which I discovered after I had decided to give up trying to get in for Bell Witch). It was then that I decided to jump into the unknown with So Hideous instead. Jump into the unknown I did as, between the blinding light show and enthusiastic use of the smoke machine, I could barely make out who was on stage. While the closest I usually get to post-metal is sticking CDs in a postbox, I enjoyed the spontaneous experience and regretted not giving the band more of a chance prior to the festival. 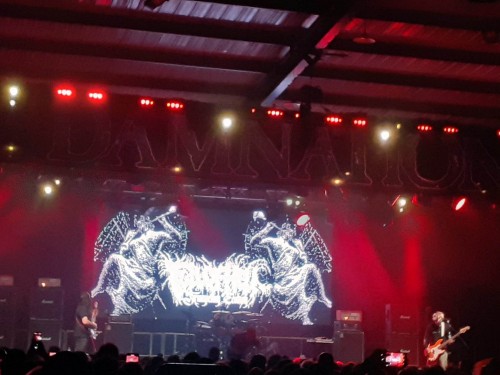 A good name for the north of England


Next up on the main stage were grindcore aficionados Full Of Hell. I've never really known what to make of the band, with today's showing highlighting the issue I have with them; the duality between powerhouse and arthouse is at odds with each other, rather than ever being in harmony. Though it made for a unique experience, it didn't elevate their performance particularly, though the crowd seemed grateful for the small breaks before another pit started up. Enjoyable as they were, I feel they could have been better. 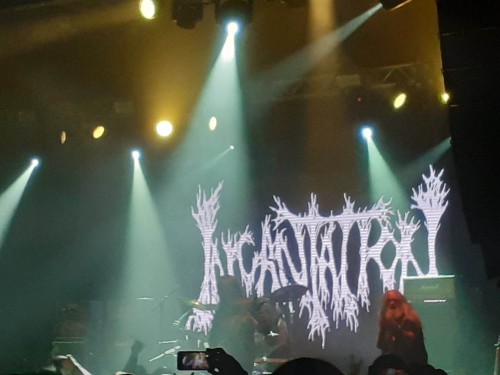 Beer giveth and beer taketh away

The lack of a good night's sleep and the morning's beers caught up with me just as Incantation took to the stage; it was a shame, as they were the sole traditional death metal act of the day, so something I had high hopes for. While the band were on point, I found myself struggling to concentrate, even as loud renditions of "Demonic Incarnate" blasted out of the speakers, especially when the doomy passages of "Propitiation" were played. McEntee was on form and belied his years; I'm glad I got to tick the band off my list, but they were one that I wished I could have been in better shape for. 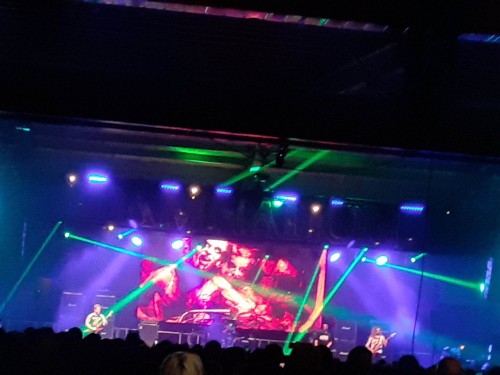 My nickname when I get my hands on a bacon butty

Re-fueled and ready to go after a quick food and water break, it was time for the first of four album-in-full sets, with Pig Destroyer laying waste to the main stage with 2001's Prowler In The Yard. A high-energy and unrelenting performance saw the album come to life with all the force of a jet engine, the audience soaking up the energy and expending it all back out in the pits. Favourite track? It all flew by so quick, it was impossible to pick out a moment in time from the blur: highly enjoyable. 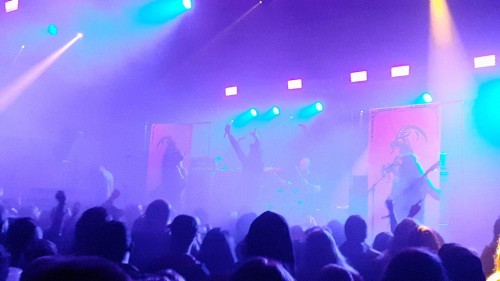 If symptoms persist, consult a Dr

Knowing what the band were capable of live, Green Lung were a must-see. Though the setlist seemed oddly out of order, the quality of the tracks shone through regardless. The band were again on top form and the hypnotic folk stoner tones were played to perfection. "Lady Lucifer" set an early bar, before a haunting "Graveyard Sun" lulled everyone in with its melodic refrain. Once again, Green Lung stole the show and tied for set of the day. 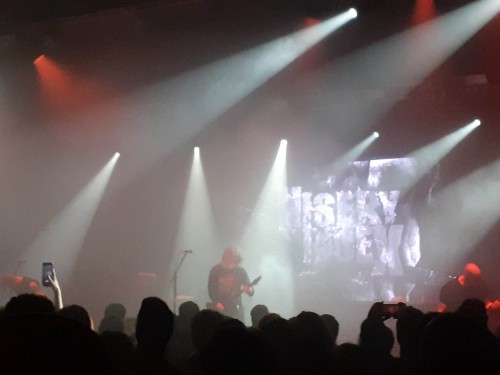 If you're happy and you know it clap your...oh

Though I thought my day had peaked with Green Lung, Misery Index managed to tie with them for band of the day; even with a medical stoppage and shorter-than-advertised set, they managed to rise above and put on a performance that will stick in my brain for years (or beers) to come. The band's grindcore approach seemed to draw the riffs from thrash and the power and energy of hardcore into one melting pot that exploded with "New Salem", "Complete Control" and a riotous rendition of "Traitors". Though the band had caught my ear in the run-up to the festival, I can now say I'm fully converted into a fan and am now chomping at the bit to see them again. 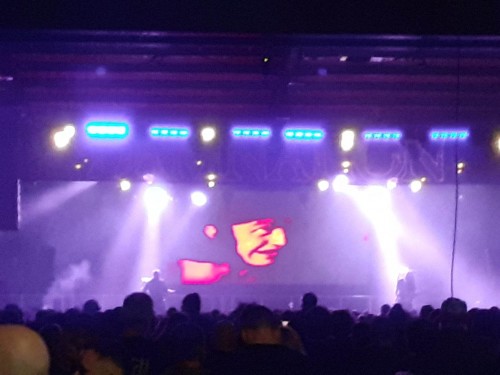 But is it vegan though?

Whether it was just because I came of age after the release of Streetcleaner, but the impact it made at the time of its release had dissipated by the time I was dipping my toes into the water with metal. Being able to hear it live did certainly breathe fresh new life into the music and made me appreciate the material that much more. Though the band seemed like a collection of musicians rather than one unit, the power and grinding assault of the music compensated for a weirdly unconnected live performance. "Pulp" was let down by the drums being so low in the mix, but tracks with less of a drum prescene (a la "Head Dirt") shone through. It was an odd experience, but one that I'm glad to have finally seen for myself. 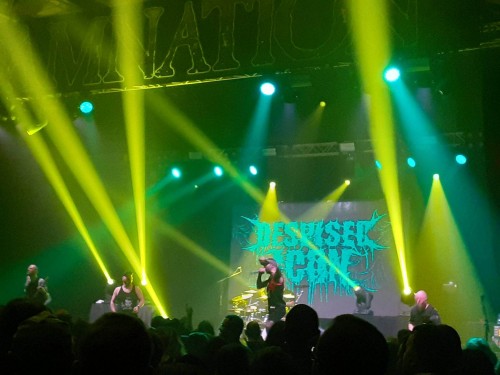 Though I was eager to hear one of the iconic bands from the early days of deathcore, watching Despised Icon felt like watching a livestream; the band played well but never seemed to connect. Even with the band sticking to their hits, including the likes of "Bad Vibes" and "Day Of Mourning", they were not able to overcome the lack of chemistry with the audience. The band were tight and on form, with Alex Erian and another vocalist who I didn't recognise issuing call to arms, but something just didn't click for me unfortunately, leaving it a rather lacklustre experience. 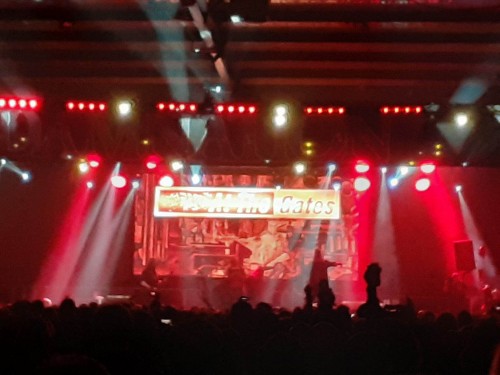 Someone's knockin' at your door, someone's at the gates

The third and perhaps most anticipated full album set, At The Gates plundered the goldmine that was Slaughter Of The Soul to its depths. Though the band's sets usually lean heavily on this album anyway, tonight offered the chance to hear the deeper cuts, specifically "World Of Lies", which was something I had to witness. Though the sound hindered the band, the riff and grooves of tracks like "Under A Serpent Sun", "Nausea" and "Cold" shone through, even if dimmed somewhat. "World Of Lies" lived up to the hype, and coupled with the usual hits, made for a strong showing. 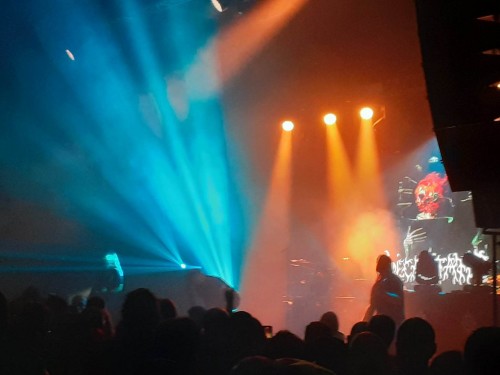 If the bar was any higher, your head would fall off

Closing out the day for myself was second stage headliners Decapitated, who were more than up to the task of bringing proceedings to a close with a bang. Focusing on their latest effort Cancer Culture did lessen the impact of the set, though the title track and "Iconoclast" earnt their spot with how well recieved they were. The highlights, however, were reserved for the two classic cuts in "Spheres Of Madness" and "Nine Steps", which had rapturous receptions. With Vogg and co recieving a hero's welcome, Decapitated's high-quality musicianship ensured the day ended on a high note.

Owing to transport issues and tiredness, I left after catching three tracks of Converge; though I would have liked to have caught more, I wanted my comfy bed and convenient transport back more. With that, not only did my Damnation 2022 draw to a close, but a whole year of live music that started all the way back in February. Damnation was a strong bookend that signed off the year in style, with some performances that are strong contenders for live show of the year and a good chunk of bands I'm pleased to have finally gotten around to seeing live. Though there were issues here and there, they could be attributed to teething troubles for the festival's first time in a new home. Hopefully the festival fixes these niggling issues and Damnation 2023 can surpass the high bar this year has set, because there is a strong chance I will be there once more.

Written on 10.11.2022 by
omne metallum
Just because I don't care doesn't mean I'm not listening.
More articles by omne metallum ››