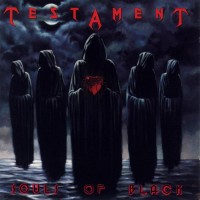 
The saying goes between us Testament fans, "If you've heard the title track and the ballad, you can forget the rest of Souls Of Black." Well, not really, as I just invented that, but it's fitting and saddening at the same time. A lot of the songs have potential but if you ever thought Practice What You Preach was cheesy, then avoid this like the plague; for this is worse, unorganized cheese. However, if you seek to find the good stuff in every album, you might as well have a fun time here.

The feel and the lyrical subject is more of the same, it picks up from where its predecessor left off. Political injustice, fighting the system, and all that the band has gone through when they were attempting to send a message rather than sing about demons and rituals all the time. Yet you know this message gets more than tired on here when there's a song complaining about how hospitals rip you off ("Malpractice"). The vocals are the same tone throughout except for the ballad, "The Legacy", which is a more than decent work. Alex seems to deliver most of his guitar experimentation on the solos here and does an amazing job and a shift of quality between verses and solos, but Eric, however, is recycling a LOT from The Legacy and The New Order and using it again.

The choruses, however, had to be catchy. Yes, they had to be, because this was aiming for catchy, thrashy rock. "Falling Fast", "Face In The Sky", "Souls Of Black", "Malpractice" and "Seven Days Of May" all have choruses that can get stuck in your mind from the first listen. Yet the riffs are null. Zero. The only time I felt variation in the guitar tone was when Louie changed his drum patterns a bit (such as in "Absence Of Light"). Despite all the bad cheese here, however, some stuff had to shine out, as this is Testament and you expect nothing less. The title track is one of their best works and so is "The Legacy".

Given the time, the production, and a rest from four albums being released year-after-year, this could've been pretty much decent. However, lost in the songwriting rush and commercial heading they were going through, it failed miserably. The only thing that gives this album a tinge of respect from me is the title track, "Falling Fast" and that damn ballad. The rest is to be avoided.

Highlights: "Souls Of Black", "Falling Fast" and "The Legacy". (Guess I've already made this statement too many times)