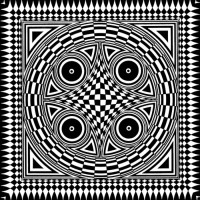 
Got a heartbreak? Dumped by your girlfriend? The girl you like won't look at you?

Then, I suggest you go listen to something else as this isn't the album for that... "Epistemological Despondency" is the debut of the English doom band, Esoteric, and there's not a single sign of love, joy, hope or any positive feelings in this album. AT ALL.

First of all, I'd like to start the review talking about the lyrics. When I read the lyrics for Epistemological Despondency I imagine a faithless person - a person whose love in its entirety is lost, a person bereft of everything that mattered to him and deluded from the promises of others. Hateful towards all society and vengeful against those who caused him pain, scarred, joyless, dreamless - waiting for his death. The lyrics here are intelligent, sincere, sick and bleeding negativity and that reflects itself on the music.

The songs here are divided into 2 disks, each one with 2 superslow long songs ("Bereft" & "Noise of Depression" and "Lamented Despondency" & "Awaiting my Death"), with a shorter, faster song between them ("Only Hate (Baresark)" and "Eradication (of Thorns)"). The guitar and bass blend together to create crushing low riffs, which sound reminiscent of Winter, though greatly slowed down most of the time. There're also a few solos used sparingly and needless to say they sound depressing as hell. The drumming fits the music greatly, slow and dragging, but handling the rare faster moments well. My only complaint here is that the double bass drum sounds pretty weird, as if someone was banging on cardboard boxes. Low budget's fault, I guess... The vocals might take some time to get used to - they're a very low uninteligible growl (even with the lyrics sheet it's hard to understand what is said), though ocasionally making a scream for emphasis and often aided by effects, like echoing and multi-layering. Speaking of effects, the whole album is full of background synth sounds and noises (don't expect it to be used to play string ensembles or piano/organ/harpsichord), but never sounding silly or electronic. Instead it adds up to the atmosphere of chaos and the feeling of intense psychosis and slowly growing insanity. All of this, with a rather scarce use of melody, combines to create a pretty much unique sound and an extreme type of doom. If you doubt me, just take a listen on "Awaiting My Death", which is, personally, my favorite song here. Sit back, turn off the lights, the phone and anything else that might disturb you and put on "Epistemological Despondency". Let your mind travel... reflect, face all your hatred and sorrow... and if you're high on licit or illicit substances, all the better!

To close this review, I'd like to show you how serious these guys are - they are actually real Satanists (not the black metal typical posing bullshit - you won't find inverted crosses or pentagrams here), followers of Anton Szandor LaVey's Satanic Bible (as hinted by the 18th Enochian Key quoted on the 1st track and on the paragraph I'm about to quote) and hateful enough to dedicate, in the CD booklet, only one tiny line of thanks saying those who have helped or supported have been thanked in person and one big paragraph of "FUCK OFF AND DIE":

"Society, the monarchy, the pigs (fucking bastards), politicians, the government, all holy denomination and followers of the "right hand path". Moralistic bastards, the legal system, all opressors and authority. All the ignorant, narrow-minded stupid humans who follow authorities without questioning. Love. All "pretend" Satanists, who give the ignorant lease to ridicule "true" Satanism. All bands who are "out to put what the people like." All the sad cunts who have turned underground music into pop-music full of clichés. All psychic vampires and scrounging wankers. All perpretators of censorship. The Birmingham City Council and employment service.

Those that use drugs, Satanism or music as a scapegoat in order to hide the true cause of their actions - you are as weak as the Christians, you cannot fight for yourselves, so you cower in renunciation.

To those who would interfere with us, beware!"

If you're a fan of extreme, slow, depressive, hateful (but with reason), sick and psychotic music, then, by all means, buy this album!
Written by Sleep In Sorrow | 30.10.2005