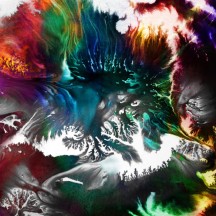 A couple years ago that magnificent asshole Thryce reviewed the Falling Down II compilation, referring to it thus:

"Basically the idea behind the Falling Down Compilations is that of a fancy wine and cigar gala for a forward-thinking alignment of musicians."

Not only was this very well stated, this sentiment remains dead on two years later for their 2012 comp. Particularly the "forward-thinking alignment of musicians."

While there is (a lot) of metal on this, this is not a metal comp. It's a music comp. You have 20 songs from 20 artists spanning some two-and-a-half hours and covering a lot of musical ground. There is, more or less, a trippy disk and a metal disk. But it is not entirely that straight forward.

Disk I kicks off pretty much the same as this review. Hopewell starts things off with the college/indy rock friendly "This Is This" which announces, well, "This is happening." From there the journey begins with an awesome, jaw dropping, trippy collaboration between Year Of No Light and Mars Red Sky. Occoai continues with a sonic homage to the Dark Side of Pink Floyd. It's all relatively smooth cosmic sailing until they punch you in the danger zone with "Friendship" by Planning For Burial.

"Scalps" by Julie Christmas is an unsettling nightmare of a track combining horribly discordant guitar and plodding drums set against the vocal stylings of Julie Christmas - who tries to conjure the best aspects of Kat Bjelland (Babes In Toyland) and crank the "nails on a chalkboard" aspect to a Spinal Tap 11.

Disk II charts a reverse course, with a flurry of metal. A track with a crushing metal groove by Black Sun gives way to the very abrasive Rorcal, who start things slowly before pushing to Ludicrous speed. Creepy Terra Tenebrosa gives way to the 10 minute slow bruising of Monarch!. Just as you're reeling from all this the floor drops out from under you with a mellow and slightly creepy minimalist piece by Syndrome and more odd chill courtesy of Ayahuasca Dark Trip. The album picks up again, and includes an awesome stoner doom track by Ethereal Riffian, and a couple guitar driven instrumentals before we learn, from the Mouth Of The Architect "How This Will End".

The effect of the sack tap and the trapdoor on these two disks is definitely worthy of note. The sudden change in direction and break in mood sort of resets your listening experience a bit. Even if the general line-ups of "trippy rock" and "metal" already vary significantly from one song to the next.

I realize I basically almost song-by-songed this in an effort to compress 20 different tracks on two disks into a relatively concise review, but this thing would read like The Economist if I adequately explored and reported on each track, and no one wants that. While there were a couple tracks that didn't sit well with me (*cough* Julie, I'm looking in your direction here *cough*), the vast bulk of the two disks were really cool tunes. If forced to pick three faves, I'll give out stars to the Year Of No Light/Mars Red Sky collaboration, Ayahuasca Dark Trip, and Ethereal Riffian.

If anything I've said sounds vaguely intriguing, it's probably worth your while to check these tunes out. Individual mileage will vary, especially given the nature of the bands selected for the comp.

The two French hommes behind this project have a bright future ahead in the Le Ministre De L'Excellente Musique.

As with prior versions, this comp is limited to 1,000 copies with some flashback-inducing packaging. They can be found here.