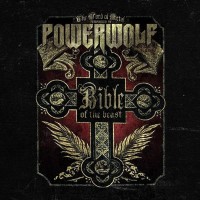 
Disc I
01. Prelude To Purgatory
02. Raise Your Fist, Evangelist
03. Moscow After Dark
04. Panic In The Pentagram
05. Catholic In The Morning... Satanist At Night
06. Seven Deadly Saints
07. Werewolves Of Armenia
08. We Take The Church By Storm
09. Resurrection By Erection
10. Midnight Messiah
11. St. Satan's Day
12. Wolves Against The World


This album is the irrefutable proof that there's something damn sick ruling in my head. I mean, being born Catholic and growing up as a pretty rational person, I should disdain, condemn for immorality, and laugh at Powerwolf. I should be dazed that anyone is dumb enough to listen to Bible Of The Beast, and at the same time humiliated to belong to the same race of these drunkard assholes. But I don't.

While listening to this album, I started wondering about the reasons why I was actually listening - and enjoying - Bible Of The Beast. I started barring the unlikely options.

Because of the music? No, absolutely no. The band plays a pretty rough and solid power metal, but no member shows an above average ability. The main riff is often overwhelmed by pounding drums or by cathedral-style organs, and I would say this is not a big loss. Looking for inspired, intricate guitarwork a la Zakk Wylde? Stay far from Powerwolf.

The songwriting, maybe? No, no. The song structure is always pretty much the same, with an initial chorus, mid-tempo strophes which lead to fast-paced choruses. This leads to the fact that, while one or two consecutive songs can still be enjoyable, it's damn hard to come to the end of the album without halts, due to the similarity of one track with another.

Then, the lyrics? Hehe, NO. This album has the most idiotic and meaningless lyrics I've ever heard. Mostly concerning religion, werewolves and sex; lyrics are graceful and poetic just as a junkie Psyduck.

Then I understood the reason why my final rating wasn't nowhere near to the average of the 4 following sub-ratings. Those, in fact, don't comprise the greatest power of this band: fun. A happy-go-lucky, grotesque, unexpected fun. And, in these days, obscure, full of earnest faces, it's great to see someone having fun in being - consciously - idiotic, in not taking care of anyone's opinion. In fact, at every listen, Bible Of The Beast makes me smile a little. But not with a laugh of superiority. A simple, sincere smile. And this is damn important.

After this introspective digression, I would like to conclude with the most touching verse of the whole album, that shows every inch of the talent Powerwolf has:

"Raise your phallus to the sky, and you're never gonna die, hallelujah!"