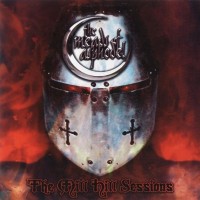 
This is not really a new full-length by English band The Meads Of Asphodel, is more like a gift for the fans out there, a mere distraction until their next full-length comes out.
Never intended for release, "The Mill Hill Sessions" is the testimony of 2 rehearsals of the band, one that took place at the end of 2003, and the other one in the middle of 2004.

The sound of this album is quite different from any of their releases, the band is stripped from the keyboards (usually handled by Mirai from Sigh), and the sound is much more raw and dirty. The album features guest appearances by Hawkwind's Alan Davey and Huw Lloyd Langton (Hawkwind, Lloyd Langton Group).

As for the music itself, without the keyboards and proper studio recoding, it sounds like a Thrashed Black Metal band with the bad production and all.
The first part of the record revisits some songs from their discography, including the Black-Punk experiment "God Is Rome" and the awesome "A Healer Made God", both stripped versions of the originals. Also included in the first part is a cover song from Sepultura, "Refuse/Resist".
The second part of the record is a song entitled "My Beautiful Genocide" track that lasts 23 minutes and it's subdivided into 7 parts, the song offers wide variety as almost every song from the band.

Interesting yet not fulfilling, experimental yet not cohesive, this is the kind of record intended strictly for fans of the band, otherwise approach carefully or get other titles from their discography, you'll be much more pleased to hear their studio recordings rather than their rehearsals.
Written by Undercraft | 02.02.2006