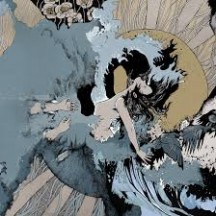 
Spring has a special vibe of rebirth and reincarnation that every culture throughout history has made acknowledgment of. The malign, bitter chill of winter passes away, life emerges once more from under its frost, and the cycle of the seasons begins once more at its start. If there were to be a soundtrack to this period of deconstruction and subsequent rebirth, perhaps it would be The Fall Of Every Season's 2013 effort. An album six years in the making, from its very start it's apparent that Marius has made the wait well worth it, the result being a beautifully crafted musical journey that has everything its predecessor did and more.

If you're looking for From Below, Vol. 2 with Amends, you'll probably find yourself in luck. Most, if not all of the elements from Marius's previous work have been kept intact: the beautifully mellow, core atmospheric doom sound somewhat reminiscent of Katatonia's recent material, coupled with a well-executed sprinkling in of some more extreme growls when called for. But make no mistake: Amends is by no means a death doom album. Marius's barbarian roars are definitely present, but they serve the purpose of enhancing the atmosphere laid down by the music's foundation (towards the end of "Sole Passenger," or the beginning of "The Mammoth"), not just to get some intense br00t4lity on, and this technique definitely helps to add an admirable level of maturity to the music's composition.

Aside from the brief extreme metal grunts and shrieks here and there, Marius's maintenance of his project's mellow atmosphere is as brilliant as ever. The guitar melodies interweave flawlessly, creating superb harmonies that help to generate a serene, almost transcendental atmosphere (the beginning of "Aurelia" feels like floating on a cloud, doesn't it?) In addition, each track of the album has a way of flowing into in the next, and when coupled with its excellent, clear production, this really helps to add a more cohesive dimension to the sound of the album as a whole, reinforcing its impact. If you think of the death metal elements on Amends as winter, and the doom atmosphere as the spring, it's almost as if Marius is paving the way of the former with the latter, as far as the composition is concerned. The Fall Of Every Season? More like The Fall Of Winter in this case. The cold is gone, the sun is out, and Marius is here to celebrate the blooming of nature with gorgeous guitar harmonies and his elegant clean vocals. So crank it loud and lie eyes-closed in a field of dandelions, folks. I'm sure that's what he meant it for.

Written on 06.03.2013 by
Apothecary
Comforting the disturbed and disturbing the comfortable since 2013.
More reviews by Apothecary ››