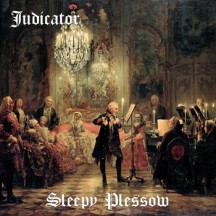 
I'd like to start by saying that it's thanks to bands like Judicator that power metal still isn't dead; bands able to melt the better features of "old" monsters of the genre in a totally personal way, escaping from the many stereotypes born around this style.

Judicator is a two man band which hails from the USA, and Sleepy Plessow, which tells the tormented life of Frederick the Great, "the philosopher king", which reigned in Prussia in the second half of the 18th century, is only the second album of their career. They started in 2012 with King Of Rome, recounting the well-known story of Napoleon. Despite their youth, the band already shows an appreciable songwriting maturity, inherited from masters such as Blind Guardian or compatriots Iced Earth.

Also, even the most distracted listener can immediately enjoy the racy duets between John Yelland's clean vocals - once I've been so sure there was Hansi Kürsch behind the microphone that I found myself prosecuting a verse with an off-key "...follow the bliiiind..." - and Anthony Cordisco's screams, sometimes reminiscent of the thrashy harsh vocals of the Chuck Schuldiner of the last years (I'm not blaspheming, at least I hope so).

To make the vocals even more versatile, Judicator followed in the vein of bands such as Ayreon, with frequent dialogues between guest vocalists. Everything said so far contributes making their music unpredictable, also thanks to the frequent variations of atmosphere, now aggressive, now melodic, and of rhythm, now slow and dramatic, now pressing and cadenced.

This brings to the fact that Judicator's songs are not classic sing-along power metal anthems: their choruses, in fact, are unexpectedly characterized by the combination of the traditional galloping double bass drum and slow, theatrical vocals.

Lyrics deserve a separate mention. The concept of Sleepy Plessow is a story of blood, anger and betrayal, and Judicator were not afraid of using brutal verses to tell it in the best way. Moreover, mottos are often used both to describe a philosophy of life ("Give all you have, and still you'll die") and to summarize the idea between a whole track ("That is the punishment - to see what you can't have")

Unfortunately Sleepy Plessow, as everything, isn't all a bed of roses, mainly because of the same feature that makes this album so interesting: the vocals. First of all, there's sometimes the feeling that the metric had been sacrificed a bit, in order to follow the melody. Besides, the clean vocal lines, in the long run, begin to sound always pretty much the same: this happens to the composition style itself.

But, altogether, Sleepy Plessow can be considered a really good album, and a must-have for every lover of unconventional power metal. Judicator has clearly still a lot to offer.

Written on 25.06.2013 by
R Lewis
Hopefully you won't agree with me, diversity of opinions is what makes metal so beautiful and varied.