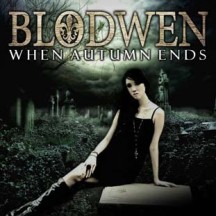 
When Autumn Ends is the title of the new EP of Indonesian female-fronted symphonic act Blodwen. As a follow-up to their previous release Black Symphony, this is an interesting testimony of the band's evolution and contains some very beautiful musical moments.

Style-wise, this release represents classical and simple symphonic metal with no pretension. The compositions are professional and the instrumental side of the album is fairly strong. Of course, the bombastic and technical factor of several more famous representatives of the symphonic department such as Nightwish, Kamelot and Epica is less prominent here, but that can actually be a positive side. Blodwen does represents the image of a symphonic band still going through the "era of innocence", so to speak; a period of stylistic evolution that many fans of the aforementioned bands are mourning in case of their favorites.

Comparing this fresh EP to the previous album, which was stylistically somewhere between Nightwish and Visions Of Atlantis, the new release already shows some new lines of development. The overall style is hinting a more alternative direction, not unlike what Asylum Pyre and Haggard are following. This can best be heard in tunes such as "Eye Of Storm" and "Once Upon A Time". The track "Blue Romance" is my personal favorite on this album as it is a showcase of the vocal prowess of Bernice Nikki, a darker soprano such as Tarja.

Those who like Tarja's solo albums will surely adore Blodwen as well. Considering the scene of later years where many mainstream bands decide to place stress on edginess and the catchy aspect (sometimes at the expense of the feelings), we actually need bands who allow to sit back and relax and feel the innocence and simplicity. It is very interesting to see what paths Blodwen will take, but one thing is for sure, I personally will be waiting for a new release that will continue this journey.
Written by Ernis | 16.09.2013