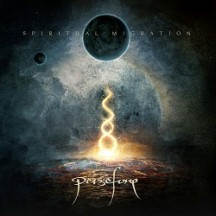 
Andorra is one of the smallest nations in the world. Lodged between Spain and France in the middle of the Pyrenees, it still holds enough talented musicians to bring to the world one of the most gifted metal bands of the last few years. If the name sounds familiar, it is because Persefone have made a name for themselves by releasing the album Core in 2006, a juggernaut of an album that still slays my psyche to this day. Its successor Shin-Ken was also a worthy experience in its own right. 2013 brings us Spiritual Migration.

With their own brand of extreme progressive metal, the musicians of Persefone continue to impress. Layering clean vocals and growls as usual, the band hasn't changed their massive sound one iota. It's like a wall of sound coming at you most of the time, using elements of progressive power (a la Symphony X), melodic death (a la Wintersun and Mors Principium Est), even black metal at times. The guitar work might seem overwhelming sometimes but I am a sucker for those over the top solos especially when they are cleverly folded into the songs.

It is beauty at its utmost brutality. Some songs such as "Zazen Meditation" are all in nuances while others such as "The Great Reality" are very much straightforward. The meat and potatoes of the record are undeniably the two parts of the song "Consciousness" along with "Inner Fullness".

By the way the artwork is phenomenal and the production absolutely bombastic, if you ever need a reason why you need to buy the physical CD.

While it falls short in terms of brutal breaks compared to Core, this album is an epic ride into the fun and crazy side of extreme metal. It's well structured, powerful, dark and symphonic. As with its predecessors, Spiritual Migration becomes quickly addictive despite its complexity. Shortlisted, you bet.

Written on 19.01.2014 by
Dream Taster
Bringing you reviews of quality music and interesting questions such as: