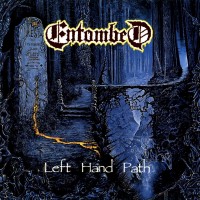 
If I ever had to choose a guitar tone to be my all-time favorite, it would definitely be the one Uffe Cederlund and Alex Hellid use on Entombed's 1990 debut album Left Hand Path. If you've never heard this album or just haven't paid enough attention, the tone is similar to a buzzsaw. Pretty brutal, huh? Sure, why not. But it's not just the guitar tone that makes this album so good.

In 1990 there were just a few death metal bands around. Florida's Death, Morbid Angel, and Obituary already had albums out, but Entombed hails from a place far from Florida: Sweden, and they helped define the Swedish death metal movement. The opening title track starts off eerie-sounding with an ominous scream, but suddenly explodes with a guitar solo so wet it could drown a shark - which brings me back to the guitar tone! Every track on the album is filled with killer riffs and solos that are immersed in the signature tone. Vocals are as to be expected in a death metal release: guttural. But not too guttural. Lars Pertov's growls are just right. More comparable to David Vincent's vocals on Altars of Madness than, say, Chris Barnes' almost incomprehensible vocal style. The drums and the bass also complement the guitar and vocals. Most tracks are fast and thrashy but definitely a death metal album for sure. One can also pick out some parts of the death 'n' roll style that the band would exercise more later in their career.

All in all, Left Hand Path in my opinion is a death metal masterpiece: one of my favorites, if not my all-time favorite of the genre. And of course it features my favorite guitar tone. If I had to pick my favorite tracks (which is difficult), they would be "Morbid Devourment", "Drowned", and "Left Hand Path".