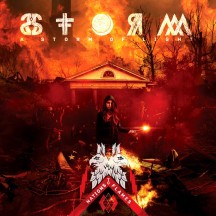 
This cover depicting rebels surrounded by flames in front of a burning flag totally warns you about what you'll hear inside: this is some dark stuff, full of raging, destructive fires and smoldering embers.

This Nations To Flames, A Storm Of Light's third album, marks quite an evolution in the band's sound. The heaviness of their previous album Alphabet Soup is still here, of course, but with a much harder industrial edge (and a narrower focus, as emphasized by the much shorter album title): there are no clean vocals this time (not that much of a loss, mind you), the sound's abrasive and gritty, the riffs are harsher, and samples are used extensively throughout the album - crowd roars are the easiest example - and to great effect (closer "The Year Is One" is a creepy affair because of those). The drumming's as great as ever, no doubts about it. And the riffs? They're impressive and totally transcribe a gamut of emotions and feelings, from restrained ("Fall" - promising a bleak future) or unrestrained ("Omen") tension, when they're not downright oppressive ("Dead Flags") or full of anguish ("All The Shining Lies") or ("Lifeless").

This industrial take on post-metal is quite original for sure, even if one can hear some obvious influences, like Ministry ("Omen" totally has a "Burning Inside" vibe), Killing Joke ("Dead Flags"), and Neurosis (no surprise here, right?) or maybe more precisely, some of Tribes Of Neurot's works (the song "Fire Of Purification" particularly comes to mind). And as both industrial and post-metal can excel at describing dystopian futures, it is no wonder this album works so well. After all, it's about the collapse of civilisation, as nations crumble under food riots.

Obviously, it lacks a little something to be perfect (or else it would have won the MSA'13 and also be our Staff Pick, right?) - the even-level sound might sound monotonous or repetitive to some. This feeling sure gets reinforced by the harsh vocals, which totally fit but aren't varied enough. They're still better than the clean vocals found on the previous effort, for sure.

Pure post-metal purists might have a rough time with ASOL's music this time. Anyway, everyone's encouraged to give Nations To Flames a few spins, as the illusion of monotony will quickly fade away. Then you'll taste the anguish, feel the pain, and watch the world burn and crumble to ashes before you.


"All nations slain
All flags to flames."

Written on 23.03.2014 by
Darkside Momo
Once your regular Hellfest reporter, now retired. I (strangely enough) listen to a lot of metal. And enjoy good beers, comics, novels and role-playing games.
More reviews by Darkside Momo ››