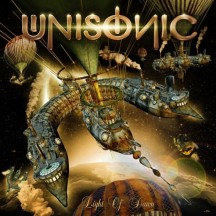 
Praise the Lord for Michael Kiske. Wait, that's like asking Kiske to thank himself. For himself.

Following the positive feedback regarding their self-titled debut album with Light Of Dawn, Unisonic start from where they left off in 2012. Far from being a Keeper Of The Seven Keys or, to have a more recent example of the stuff these guys are doing in their current bands, an Empire Of The Undead, Unisonic's sophomore album features a classy and varied kind of power metal, enriched and deepened by a finally relevant bass.

What Light Of Dawn shows is the clever and fruitful use of experience, that allows a wise blend of different genres and a studied track positioning (an undervalued art, if you ask me), that keeps the listener entertained thanks to the constant juxtaposition of mid-tempos and faster tracks. Experience, however, together with the maturity obtained with age, also lets people whose working relations fell apart in their youth to come back together and cooperate happily: this is the case of Unisonic, a committed band at work.

All band members here are proven musicians, and they show why once again since Light Of Dawn is a team effort. It's full and coherent, also thanks to a production that puts everything where it should be. This said, one cannot omit how Michael Kiske, once again, is a terrific added value to the album. His voice is still clean and bright: the Helloween days are not so far gone, but he's managed to get even better. Projects such as Kiske/Somervile or Place Vendome made him develop a deeper, romantic and more soulful voice than it was in the late 80's.

Despite being only at their second album, Unisonic's sound is solid and personal. They are not Symfonia, the redemption daydream of a single aging musician, and nor they are Adrenaline Mob, a bunch of self-satisfied guys playing at the same time, but not together. No, Unisonic are a band, and a pretty cool one. Supergroups don't always fail.

It may not be a masterpiece, but Light Of Dawn, despite losing it for a while in its middle-last part, is a worthy successor of the acclaimed debut. And, as many of the albums with Kiske on vocals, it's damn uplifting. Somehow, it reassures, it tranquilizes, and it lulls you.

The light of dawn may have passed for Hansen & co., but don't even dare mentioning sunset.

Written on 10.08.2014 by
R Lewis
Hopefully you won't agree with me, diversity of opinions is what makes metal so beautiful and varied.