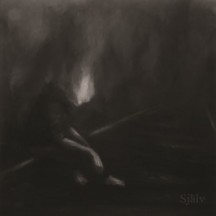 
With the dawn of the internet, music as a business is reverting back to the way it was when it was first recorded; singles. Whether they're a couple of hits from a popular artist, or small time bands who prefer pounding out frequent, shorter EPs, full albums are slowly being phased out. Recordings like Själv show us why some times nothing beats a full-length album that can drag you down to hell and back out again.

If you've got two brain cells to rub together, you should be able to guess that Ömheten play black metal. Describing their sound is a bit difficult without giving a tedious play-by-play. It's not an avantgarde, schizophrenic album, rather it's the sonic equivalent of a well-paced story. It evolves, it grows, it unveils and reveals new pieces with impressive fluidity. It opens up with a real gritty, raw, claustrophobic feel, caught somewhere between Agruss' Morok and Nachtmystium's Silencing Machine.

Then, just as things begin to grow a bit stale and predictable, new characters are introduced. Surprising melodic leads, piano and cello all give it a really haunted feel without resorting to any type of polishing. A few post/gaze-y moments a la Amasoeurs get blended in to make it cold and distant. Some doomy riffs that sound like a black metal approach to Black Sabbath pop up here and there, while a few punky marching riffs bring things to a stomping pace when they need to be.

Själv really is a journey of an album. You won't get a full picture of the band until at least halfway through, but not through any imbalance in the song quality. New doors open, different paths are taken, and things progress in a natural way. Which makes the end of the album an unwelcome left-field turn. "Självmedicineringens Experter" builds itself up into a massive, sweeping soundscape somewhere in the vein of Deströyer 666's "Sermon To The Dead". Boom. The perfect, logical way to end the album. Then Ömheten decides to come back out for an encore..."Evig Semester Från Mig Själv". Not an awful song by any means, an aggressive, refreshing change of pace, but just completely out of place. It's like reading a book that ends well, only to ruin your entire perspective with a violent shift in tone in the epilogue.

Like black metal? Like listening to entire albums? Then there's no reason to not be listening to Själv right now...er...Just hit "restart" once you get to the last track.