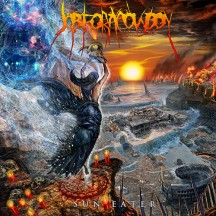 
I will admit that I was never a Job For A Cowboy fan. They were OK but I found them to be too noisy at times, too faceless at others and, very often, just average. Just another modern death metal band, for the most part.

And then they released Sun Eater.

This is one hell of an ambitious sounding album. It pushes Job For A Cowboy to a new level.

Firstly, this album sounds absolutely sumptuous. Death metal seldom sounds this great. The mix and production are extremely well balanced with every component fitting in perfectly. Even the drums are slightly lower in the mix and allow the guitars and bass to shine.

Nick Schendzeilos's bass playing is especially a treat. It harkens back to the formative age of progressive and technical death metal in the 1990s and evokes the likes of Tony Choy, Steve Di Giorgio and Roger Patterson.

Then there's those stunning guitar solos and riffage galore. Interestingly enough, at times the riffs and overall vibe are reminiscent of early Mastodon or Opeth's more brutal moments. Overall it still sounds like Job For A Cowboy, but more mature and more confident.

The music itself is more mid-tempo and melodic than many previous efforts. Unlike so many bands such as Revocation that flounder in mid-tempo stuff, Job For A Cowboy do it in style for the most part. Songs like "Encircled In Mirrors" are downright catchy, not a term used often with technical death metal.

As with anything, there are some minor criticisms. Some of these are related to general issues with modern death metal and especially the more technical side of it. Due to the massive variety of riffs within each song, it means that sometimes the songs tend to blur into each other. In the 1990s this was often avoided through instrumental interludes such as on Testimony Of The Ancients or Blessed Are The Sick, but this isn't really used much in the 21st century and certainly not on this album. In any case Sun Eater offers enough delicious music to make this a minor issue.

On Sun Eater, Job For A Cowboy have finally released an album that cements them not only as a top tier death metal band but perhaps even a top tier metal band. Even if the success of Sun Eater is nowhere close to the musings of this scribe, at least they have gained one new fan.