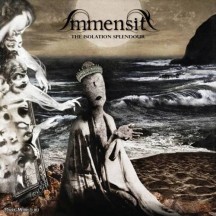 
01. Heartfelt Like Dying
02. Irradiance (For The Unlight)
03. The Isolation Splendour
04. The Sullen
05. Everlasting Punishment
06. Eradicate (The Pain Of Remembrance)
07. Adornment


In a year that has been, to this reviewer, mostly unimpressive in the doom metal department, the Greeks in Immensity decided to close things out with something delightfully fresh and inspired.

Immensity are no new name to us at Metal Storm, as their demo previously won our Clandestine Cut Of The Year in the 2012 MSA. Channeling some of their prior ideas into a full length debut, the band is now back with The Isolation Splendour, a more focused, refined slab of death doom, with a pleasantly relaxing atmosphere oozing of gothic influence. The riffs plod along at a moderate pace that always seems to be building towards some type of climax by weaving their way around the vocals, playing off of them in a very complementary sort of relationship. As one might assume, things feel a bit heavier and harder-hitting when the growls dominate, and the beautiful clean vocals are left to rear up when things become softer and more melodic, as on "Heartfelt Like Dying."

This very cohesive aspect of the songwriting on The Isolation Splendour is quite likely the album's most attractive feature. Nearly every part of the composing process here seems to matter in one way or another, and very little feels out of place. If you hear some death grunts over some chugging riffs, some wailing vocals, or a very restrained guitar lead, each is either leading up to a heightening of the mood, or coming off of one and bringing things back to a more serene state of rest. There's a strong sense that if you took any one part out of the album, everything else would fall apart (see "Eradicate (The Pain Of Remembrance)" especially), and it's the mark of good songwriting.

All in all, The Isolation Splendour isn't really flirting around with any profoundly new ideas. Gothic doom, melodic death doom, and their derivatives are already well developed, with plenty of big name bands. But there's something about Immensity's take on it that is far more immersive and emotive than average, and it lies in those lengthy, dynamic tracks that feel like they're telling a story with their melodies and sound manipulation. Looking for a potential breath of fresh air in death doom? This album may be for you.

Written on 12.01.2015 by
Apothecary
Comforting the disturbed and disturbing the comfortable since 2013.
More reviews by Apothecary ››