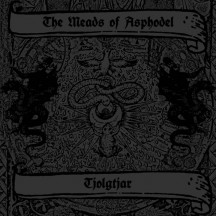 
As anyone who knows me well enough should know by now, it's impossible for me to stay quiet when it comes to The Meads Of Asphodel. This year's interesting Taste The Divine Wrath split sees the peculiar British group teaming up with black metal band Tjolgtjar, resulting in two sounds that, while somewhat simplistic, still retain a great feeling of uniqueness.

From the perspective of The Meads Of Asphodel, Taste The Divine Wrath sees the band being a little less restrained than is typical. You're not going to find the really batshit moments such as those on Sonderkommando or The Murder Of Jesus The Jew here. Rather, the music is much more straightforward, bearing greater resemblance to their earlier material than anything else. Instead of an all out blend of various sounds, the black metal more or less dominates the mix. However, you can still pick out little Meads trademarks here and there that make you know that this is still without a doubt their music, such as the eerie spoken word intro to "Balthasar Gérard," or the acoustic passages on "Infidel." Additionally, the Meads trend of cover songs that butcher their originals rears its head once more here with the hilarious cover of Florence + The Machine's "You've Got The Love" (rewritten with new lyrics as"You've Got The Hate").

On the Tjolgtjar side of things, things are much more raw and abrasive, following more in the vein of traditional black metal production and delivery ("The Fifth Mass And Her Works"). But even so, there's also a pleasant degree of distinction here as well. "Near You Always," for example, is quite interesting with its use of bells hidden quietly in the background, as is"A Goat In The Wood," a track that's essentially driven primarily by a guitar solo throughout. As with The Meads Of Asphodel, these little subtleties within a more orthodox sound help to give the music a good edge of distinction, while still retaining enough relatability to not be too inaccessible.

Taste The Divine Wrath is thus a highly enjoyable split, with The Meads Of Asphodel and Tjolgtjar complementing each other quite nicely. Since the Meads are more to the weirder side of things, they make up for what Tjolgtjar are lacking in this area, and as Tjolgtjar are more raw and aggressive, they likewise fill in for the Meads in that area. It's very pleasing that there's a good bit of material here; usually with splits you see each band only putting out one or two tracks, but with this one, there's a good chunk of music that allows you to make a better-than-usual judgment of how the bands relate to each other's sounds. Ultimately, with this split, both The Meads Of Asphodel and Tjolgtjar are successfully proving that there's always room for making your music distinct while still sticking to a more conventional sound.

Go taste it and get the hate, you infidels.

Written on 06.06.2015 by
Apothecary
Comforting the disturbed and disturbing the comfortable since 2013.
More reviews by Apothecary ››