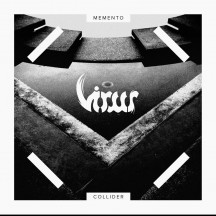 
What is the nature of a virus, exactly? It attacks stable, living cells and replicates itself, to spread to other locations and keep gaining in power. So the music of Norway's Virus follows suit, as it attacks your fragile, stable body, gaining power as it makes it bounce, backflip, and behave in other delusional ways it ordinarily wouldn't. Is your body having a party? Is it being stricken by disease? It could be both. It could be neither. That's just part of the beauty of the Virus.

Memento Collider, the fourth full length from these wacky Norwegians, sees them back in full force with their signature, Avantgardish sound. How do we describe this sound exactly? Rarely do Avantgarde metal bands create music that is so strange and out there... yet also so damn catchy and memorable. Virus don't employ the Avantgarde of say, a randomized, Unexpect type nature, or the dark, chaotic kind of bands such as Terra Tenebrosa or Cloak Of Altering. No, with Virus things are a bit more low key and mellow than that. The immediately recognizable, dissonant guitar tone of frontman Czral and the rumbling, funky bass lines of the highly talented Petter Berntsen dominate the mix, while drummer Einar Sjursø lurks in the background weaving jazzy-type rhythms all around them. Between the groovy melodies Czral carves out and the bouncy bass that Bernsten lays down underneath him, the music is downright danceable at many points, especially on "Rogue Fossil" (check out the video for it with Costin Chioreanu's animation... the two go wonderfully together).

The lack of a significantly dark, chaotic atmosphere with Virus does not mean that their music isn't still strange as hell, however. How would you label Virus exactly, and on what grounds? Would you call them prog metal, on the basis of the jazz-like drumming and off beat rhythms found on tracks like "Dripping Into Orbit"? It's possible. You could perhaps, just as easily, call them psychedelic, going off of the more relaxed, trippy style of guitar found later in the same track. But wait, what about those pounding, throbbing, bass lines throughout Memento Collider? Are we dealing with some sort of off-the-wall funk band here? Could be. And further still, what about when that more lo fi, dissonant type guitar tone from Czral pops up, especially on "Steamer"? Is there a potential black metal influence here? All of these labels could be accurate. None of them could be accurate. And that's the beauty of this band's mystery.

As mentioned above, what makes Virus truly special is the fact that they manage to employ a type of Avantgarde approach that is inexplicable and nearly impossible to fully wrap your head around, while still managing to be bouncy, memorable, and catchy as all hell. Memento Collider is Avantgarde, sure, but the composition isn't rapidly crazy to the point where you're going to leave it with a feeling of "damn, that was good, but I wish I could remember what parts I liked most." No, with this Virus album you'll most definitely remember. This music right here sticks, and it sticks hard. Most ironic of all, this is a virus that you actually want to catch, as the grooves, the silly, Lewis Carroll-ish lyrics, and multifaceted songwriting take command of your body, ultimately healing it for the better.

Written on 30.05.2016 by
Apothecary
Comforting the disturbed and disturbing the comfortable since 2013.
More reviews by Apothecary ››