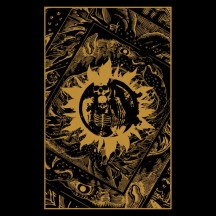 
Likely less of a later-year impact as Sulphur Aeon, but still not worth ignoring, we've had releases from the collective known as Mystiskaos both released on the second day of Christmas. We talked about Guðveiki; let's talk about Délirant, too.

Mystiskaos is a label/collective formed by Alex Poole (Chaos Moon and Skáphe) and HV Lyngdal (Wormlust) in the wake of Fallen Empire's recent plans to close shop in 2018. Mystiskaos first dealt only with music by its two founders, slowly releasing music by related projects like Entheogen, which still had one of the two as members. Now they're starting to sign and release music from outside the two, this being Délirant. It is the one-man project of one Spanish mastermind, D.B., who is also at the helm of Negativa, so there's a slight connection to the collective as HV performed vocals on the band's album 03, also released this year (check it out). So how does Délirant fare?

You can clearly hear why the French word for "delirious" was used, as this album is filled with dark psychedelia and a constant nauseating feel. The rawness of production that is clean enough to hear everything perfectly but not at all pristine really does help this album achieve these hallucinogenic vibes. The first track drags on a bit too long and the first few are less immersive, but once you do get immersed, nothing breaks it. It's like eating magic mushrooms in a haunted house during winter. The music also changes pace once in a while and doesn't shy away from transitions and mellower moments.

The riffs both feel extremely repetitive and like they're always changing, thus being both hypnotic and engaging. The drums and the bass are not left as just background rhythm tools, but they don't exactly shine with virtuosity, which is understandable in a one-man band. Besides the dissonant and sometimes quite colossal riffs, the voice carries the album all throughout. Feeling very subdued but somehow still at the front of everything, it feels like D.B. is howling at us through a portal. The haunted and tortured vocals feel like they're crushed underneath the mass of riffs and ominous atmosphere.

Slightly less bludgeoning than its counterpart released that same day, Délirant is still a very psychedelic record as its title would suggest, but not really the trip you'd be looking forward to. A quick 35-minute trip into the abyss.

Note: This is my final review of 2018 music. It was a fucking wild ride and I hope you all listen to more of it once the Metal Storm Awards begin. In the meantime, here's a few 2018 albums I wanted to review but didn't get to, so I urge you all to check them out:

Written on 13.01.2019 by
RaduP
Doesn't matter that much to me if you agree with me, as long as you checked the album out.
More reviews by RaduP ››